Increased levels of environmental awareness have brought the issue of sustainable development practices, methods and materials to the forefront of many international discussions. And while regulations that seek to benefit personal and environmental health such as the Clean Air Act and the Occupational Safety and Health Act have been in effect for over 40 years, there has been a noticeable push in the last decade or so to better manage and protect environmental and human resources.

The United States Environmental Protection Agency (EPA) and the Occupational Safety and Health Administration (OSHA) have identified volatile organic compounds (VOCs) and hazardous air pollutants (HAPs) as being particularly detrimental to human and environmental health. According to the EPA, industrial facilities, electric utilities, motor vehicles, gasoline vapors and chemical solvents in paints and coatings are the primary man-made sources of VOCs and HAPs. (VOCs and other hazards are discussed in The Dangers of Typical Corrosion Prevention Solutions.)

While the coating industry has made significant strides in complying with state and federal regulations, many solvent-based coatings continue to contribute to overall atmospheric VOC emissions. Additionally, increasingly tight EPA regulations are making it more difficult for solvent-based coatings to achieve compliance. In response, the industry is now shifting its focus towards low-VOC waterborne coating technologies

What Are Waterborne (Water-based) Coatings?

Paints and coatings are typically classified by the type of binder, or resin, from which they are made. Alkyds, urethanes and epoxies are all examples of resins that lend their name to various types of coatings. (Alkyds are discussed in An Overview of Alkyd Resins.) However, while binders, pigments and other additives play a vital role in determining the physical and mechanical properties of coatings, one of the most crucial components is the medium that dissolves these compounds for easy application.

This liquefying agent can either be water or some other chemical solvent, hence the names water-based (or waterborne) and solvent-based coatings. While both coating classifications may have some similar characteristics, they possess specific properties that lend themselves to various applications.

Waterborne coatings, as their name suggests, are coatings whose liquefying agent consists primarily of water. The water serves mainly to disperse the resin added to it to produce the coating. While the general composition of various waterborne coatings may differ, they can contain as much as 80% water by volume, with trace amounts of other solvents, such as glycol and ethers. The high water content of these coatings gives them specific workability and environmental benefits over other types of paints and coatings. The Paint Quality Institute estimates that approximately 80% of household paints are water-based. 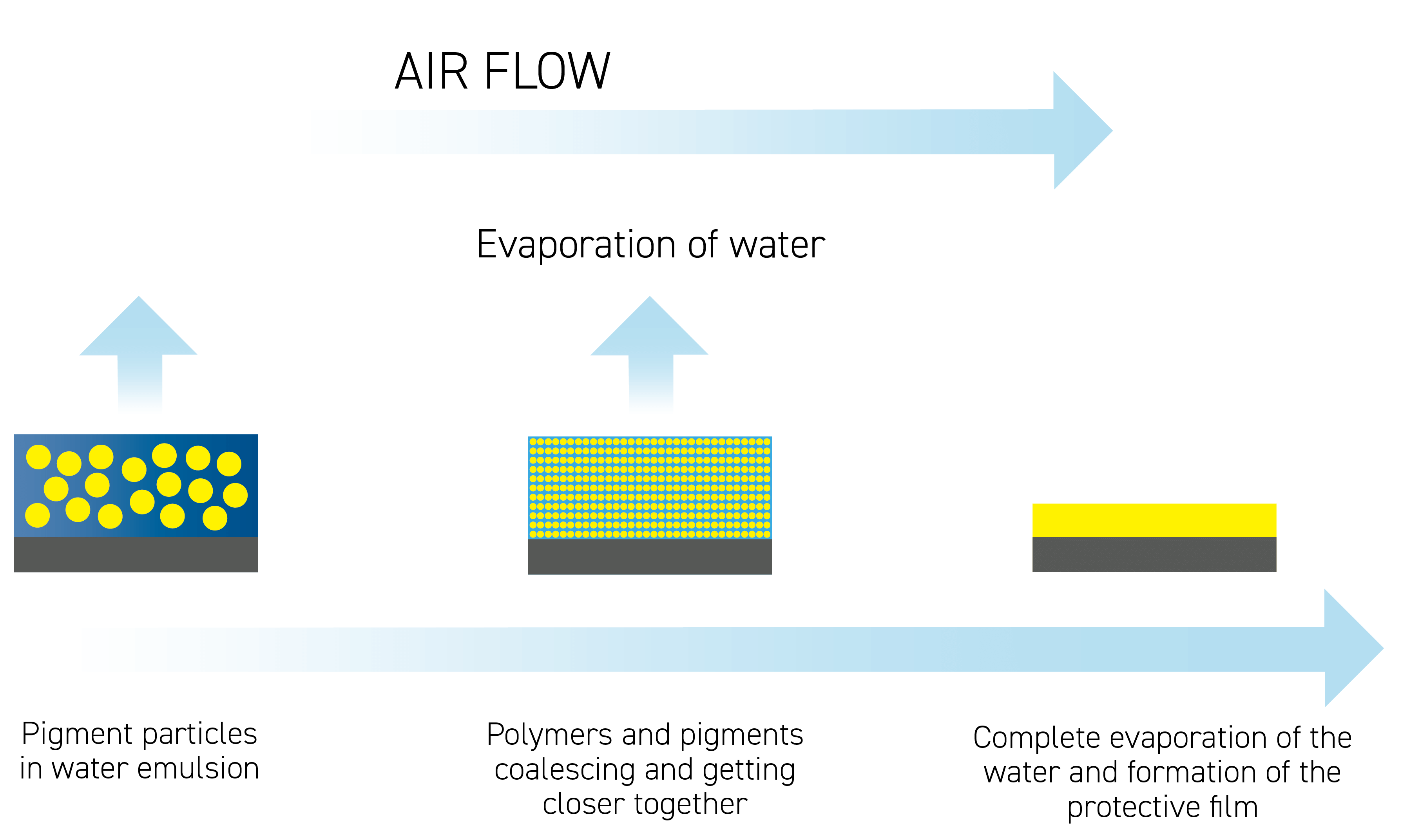 Solvent-based coatings, on the other hand, contain liquefying agents that consist primarily of chemical solvents. These solvents evaporate via various chemical reactions upon contact with oxygen. The air in the atmosphere surrounding the solvent-based coating typically helps to speed up these reactions, and thus, the drying time.

Waterborne coatings possess similar characteristics to their solvent-based counterparts, such as curing mechanism, polymer composition and film integrity. While water is known to produce corrosion in metal parts and components, these coatings are specially formulated to ensure that all water is drawn to the surface of the coating film before corrosive reactions can occur.

The Push Towards Waterborne Coatings

One of the main attractions of waterborne coatings is their water-based composition, which produces fewer odors and harmful emissions. This ultimately translates to a reduced adverse impact on persons and the environment. The increased enforcement of environmental and personal health and safety regulations, as well as the rise in sustainability practices, has helped to accelerate the push towards waterborne coatings.

Compliance with EPA standards is perhaps seen as one of the main driving factors for the gradual shift towards waterborne coatings. As solvent-based coatings dry, they release a significant amount of VOCs. When combined with sunlight and nitrous oxides, VOCs can produce ground-level ozone, a major component of smog. As a result, several state and local governments have placed restrictions on the quantity of VOC emissions allowed within a given timespan. The governing standard for coating VOC emissions in the United States is set forth by the EPA. And while studies show that ozone levels have improved by more than 32% over the past four decades, some states have tightened regulations even further, making it increasingly difficult for solvent-based coatings to meet regulatory compliance. 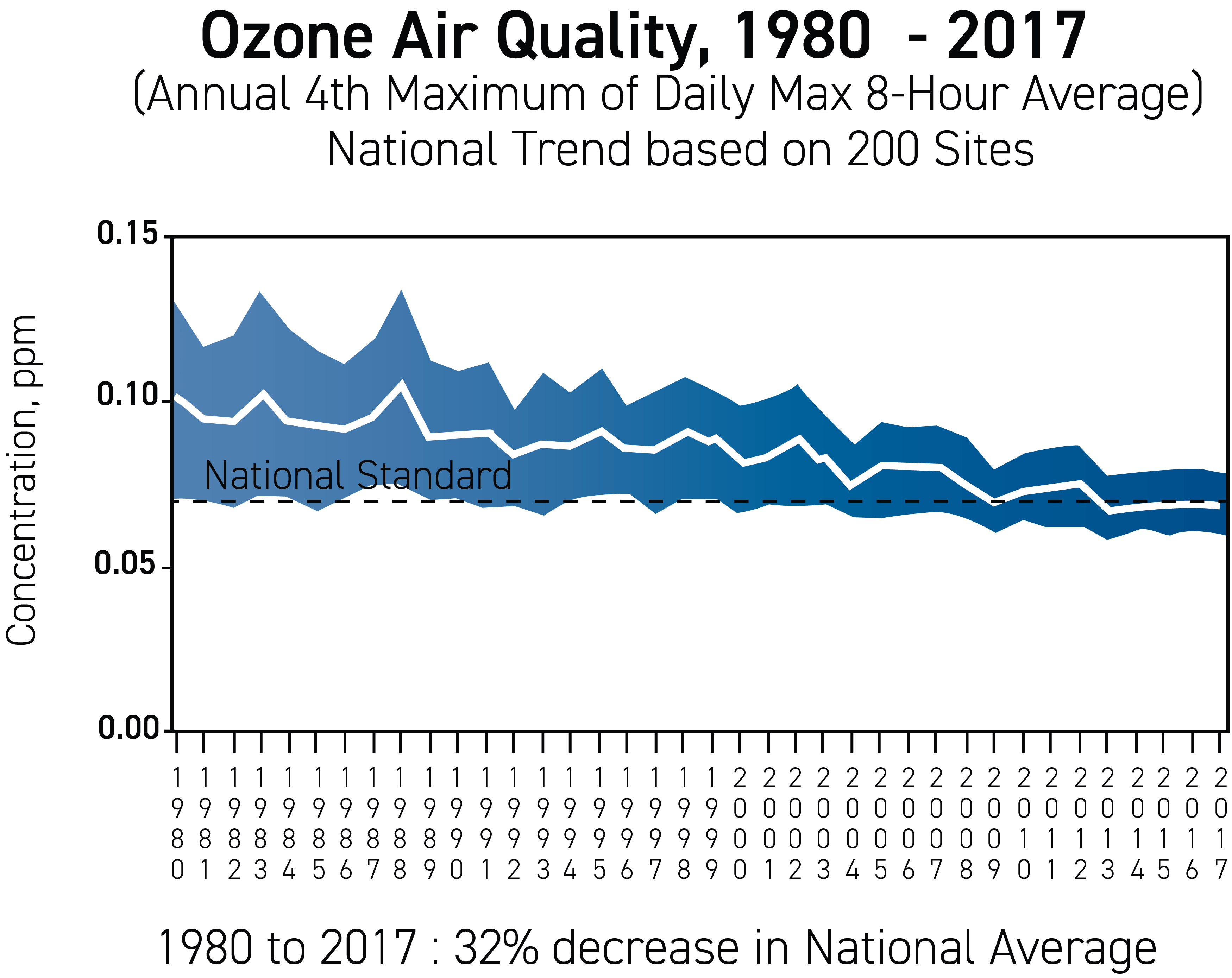 Another factor driving the use of waterborne coatings is the need to reduce the emission of toxic air pollutants. These pollutants, which are emitted predominantly from solvent-based coatings, are known to cause serious health issues, such as certain types of cancers and birth defects. Examples of HAPs include but are not limited to glycol ethers, methyl isobutyl, benzene, styrene and methylene chloride.

The effects of these pollutants are especially prevalent when working in confined areas (e.g., a spray booth) or poorly ventilated spaces, where these emissions can also create uncomfortable environments for workers. Section 112 of the Clean Air Act governs the federal control program for HAPs. The Act requires that the EPA place restrictions on the allowable amount of emissions originating from industrial surface coatings and their manufacturing operations.

The Challenges with Using Waterborne Coatings

While waterborne coatings are comparable with their solvent-based counterparts on many levels, their performance is sensitive to specific environmental conditions during the coating’s curing phase. Humidity, for example, can affect the ability of water to evaporate from the surface of the coating; thus making them impractical in some climates. (For an in-depth look at drying and curing times, read When is a Paint Dry?)

Water-based coatings also require more attention during substrate preparation. While water can be a suitable substitute for chemical-based solvents in some applications, it is also a key element in the corrosion of metallic surfaces. If the water in the coating comes into contact with the metal substrate before the coating is applied, spot rusting can occur. Therefore, these coatings must be formulated to ensure that water is pulled to the surface before the onset of corrosion. Despite these shortcomings, waterborne coatings are suitable for a broad range of finishing applications including automobiles, furniture, plastic, concrete and printing inks to name a few.