How to Avoid Chelant-Based Corrosion in a Boiler Water Pipe

Through complex chemical reactions, chelants can cause a negative side effect that leads to corrosion and thinning of the pipes used in boiler systems.

A chelating agent is an essential component in a boiler system where hard minerals exist and need to be “softened” and dissolved in the conveyance. Some examples of commonly known chelants are ethylenediaminetetraacetic acid (EDTA) and nitrilotriacetic acid (NTA). In addition to improving the solubility of hard minerals, chelant products are also desired in the industry due to their form and practicality for injecting into the solution. Chelating agents can also clean stains inside pipelines by removing the soft tissue that tends to build up on the inner pipe wall.

However, through complex chemical reactions, chelants can cause a negative side effect that leads to corrosion and thinning of the pipe wall. An overuse of chelant can create a toxic environment and produce hazardous metals such as cyanide.

An example of the drawbacks of using a chelant is demonstrated in an incident that occurred in a private industrial power plant in the Midwest United States in April 1996. In this case, a 6-inch diameter carbon steel feedwater pipe ruptured. An intensive investigation was carried out immediately, which determined that the failure was caused by a progressive thinning on the feedwater pipe wall. The study of this incident led to a terminology known as “flow-assisted chelant corrosion.”

The boiler where the pipe failed is a coal-fired unit with a steaming capacity of 275,000 lb/hour. The boiler water contained a high amount of iron. It was manufactured by the Babcock and Wilcox Company and installed in 1962. Following the installation, there was a modification that added a feedwater line to the system. The modification was successfully completed. Fifteen years after the original installation, the boiler system was enhanced with a direct injection of chelant into the feedwater. Sampling, monitoring and testing were reported to have been performed after completion of the enhancement.

A few years prior to the incident, the operators discovered corrosion on the pipe section where chelant products were injected just upstream of the failed section. The boiler was reported to be operating normally at the time of the rupture. Thinning of the pipe wall was apparent and believed to have occurred prior to the rupture. The chelant product was periodically injected immediately upstream of the failure location.

Figure 1 shows a schematic of the piping arrangement at the time of the accident. 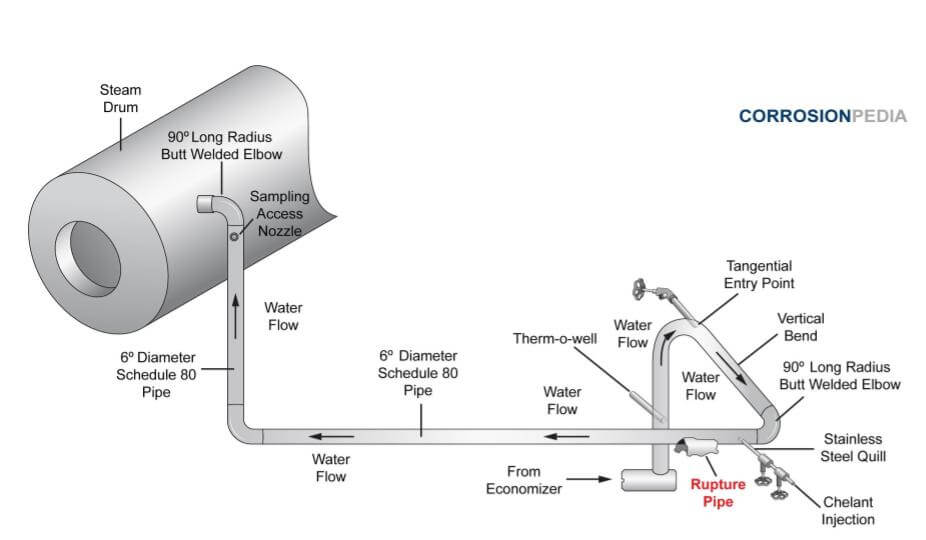 An analysis of this type of corrosion in a boiler system can be completed based on an understanding of the complex chemical reaction that occurs in the corrosion process. In a simplified form, the chelating agent reacts with the iron oxide (originating from the pipe material) in water. This results in hydrogen gas, caustic and iron chelate, which is a byproduct of chelant. The iron chelate is essentially dissolved iron and indicates that the pipe material has degraded and subsequently reacted with the chelating agent. The more of this reaction that occurs, the more one can expect continued corrosion and pipe wall thinning.

Excessive use of a chelating agent is not recommended and should be avoided especially under high temperature and high pressure conditions. This was found to be a key factor of the accident, which led to the flow-assisted chelant corrosion.

A chelant is an oxidant and a solvent, similar to an acid that triggers corrosion. (Learn how to dispose of used solvents in our Free Guide: Solvent Recycling to Reduce Hazardous Waste.) In the aforementioned incident, the corrosion reduced the pipe wall thickness of the feedwater line. The induced corrosion appeared in scalloped spots. Though corrosion and thinning of the pipe wall take place at the microscopic or molecular level, this can be monitored regularly through video and x-ray inspections. (Related reading: How Closed Circuit Television (CCTV) is Changing Sewer and Pipeline Asset Management.)

Chelants have a strong chemical composition due to their high solubility in water and low biodegradability. When interfacing or reacting with other substances, the chelating agent persists and transforms in the environment. This drives the need for close monitoring of chelant use and an incentive to implement alternative solutions that are more environmentally friendly.

As an example, polyaspartic acid is a biodegradable metal chelator and a “greener” option. It provides a sustainable solution with an anti-scaling mechanism and inhibits corrosion to a certain extent. It is renewable and cost effective in its application. However, its biodegradability often limits the enduring capability.

The lessons learned from this case study that can be applied to similar boiler systems include the following:

Further information regarding chelant corrosion can be found in The NALCO Guide to Boiler Failure Analysis.

The incident on a power plant's carbon steel feedwater pipeline was caused by flow-assisted chelant corrosion and was driven by an over-injection of chelant product into the boiler system that was operating at high pressure and a high conveyance temperature. Recommend mitigation measures include monitoring the chelant product content and regular inspections.

It is also recommended that an alternative chelator be considered, especially those that provide more environmentally friendly characteristics such as easier biodegradability.

How to Improve Feedwater Quality to Prevent Boiler Corrosion

Corrosion Management in Water Treatment: A Look at Water Pipeline Corrosion and Why It's Becoming a Problem