How to Effectively Recognize, Prevent and Treat Pitting Corrosion

Though barely visible, pitting corrosion can have serious implications because the cavity it bores below the surface can be both wide and deep, thus seriously affecting the load carrying capacity of the structure.

Pitting corrosion initially presents itself as one or more tiny holes or cavities that are nearly invisible to the human eye. But this type of corrosion can quickly progress in both horizontal and vertical directions below the substrate's surface, and can result in failures and breakdowns with disastrous consequences. Some of the deadly bridge collapses in history are attributed to the onset of deep or wide cavities as a result of pitting.

A structural member (e.g., a metal beam) can lose its load bearing capacity due to pitting corrosion, resulting in fatigue cracks due to overloading, and finally culminate in the collapse of the entire structure.

Pitting can often cause severe problems even though it is sometimes neglected by those who are responsible for the maintenance of plant equipment. (For a deep dive into one particular industry where pitting is problematic, read Pitting Corrosion in Oil and Gas Wells and Pipelines.)

For these reasons it is necessary to understand:

Types of Metals at Risk for Pitting Corrosion

Metals that naturally form effective passive films (oxide films) to preserve their surfaces from corrosion are the ones that show susceptibility to localized pitting. Localized corrosion is initiated on surfaces wherever the protective films are weakened or broken in one or more spots and do not heal themselves. Alloys of aluminum, nickel, copper and stainless steel are the materials commonly susceptible to pitting due to a weakened protective film. Slag inclusions and surface irregularities can contribute to a weakened oxide film. (For a deep dive into one of these susceptible metals, read Understanding Aluminum Corrosion.)

Inadequate access to oxygen hampers the healing of the broken passive film. Where the film's breakage is not widespread, as in the case of common carbon steels, general corrosion of the complete surface is prevented and localized corrosion at some spots ensues.

Whenever the protective oxide film is minutely punctured or damaged due to corrosion or from a mechanical cause and it does not heal itself, it develops localized pitting. In this case, the damaged oxide film becomes a cathode and the tiny areas of exposed metal becomes an anode. Where the damaged film is in contact with solutions of chlorides, fluorides or sulfides, the pitting activity can become acute and autocatalytic.

Based on the shape, penetration pattern, direction and the size of pit formation, any pitting is classified as one of the following types:

The type of pitting is recognized on the basis of metallography testing of a pitted cross section. The pattern is identified on the basis of penetration depth, shape and size (Figure 1). A standard guide for identifying and rating pitting is provided in the ASTM G46 – 94 (2018) standards. 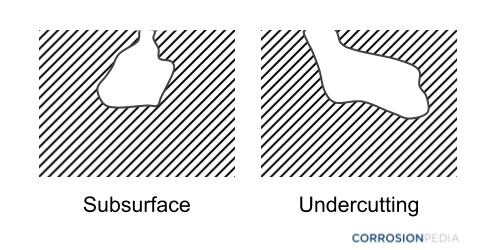 A value known as the pitting factor, which can signify as a measure of localized corrosion, is calculated as the ratio of the depth of the deepest pit to the average depth of penetration using the formula:

The pitting resistance equivalent number (PREN) for stainless steel is given by the formula:

It is important to make a distinction between pitting and micropitting. Micropitting is different from pitting corrosion, and commonly occurs in a lubricated gear box or a bearing when the lubricant film thickness is smaller than the surface roughness of the gears and bearings.

Micropitting is caused due to a failure of the lubricant film, leading to the formation of pits on the order of 10 to 20 microns in depth. Pitting corrosion, on the other hand, causes pits that measure in millimeters in depth. While pitting corrosion is caused by an electrochemical reaction, micropitting is caused by wear due to a failure of the elasto-hydrodynamic film of lubricant interposed between surfaces in relative motion with one another. This failure commonly occurs on the surfaces of gears and rolling bearings that are heavily loaded.

A solution of corrosive chemicals such as chlorides can initiate pitting at the site of a damaged or broken passive film, even on a defect-free metallic substrate.

In the case of mildly corrosive or noncorrosive environments, inclusions and other defects in the metal can cause pitting initiation.

However, in most cases a combination of material (metallurgy) as well as environment factors (chemicals) directly contributes to pitting.

Other factors able to influence pit formation include:

Evaluation and Testing of Pitting

Several methods exist to test for and evaluate pitting corrosion.

Electrically conductive materials such as ferrous metals can be tested for pits using magnetic particle testing based upon the variations in magnetic fields generated by defects in the material.

In this method the number of pits found by a microscopic examination in a defined surface area are counted. Metallography of the cross section will help identify the shape and depth of the pit as well as the acuteness of the pitting corrosion damage.

The weight loss test is a sample-based test, during which the metal sample is immersed in a chloride solution and the pitting corrosion rate is determined by examining the sample after a few days.

In ultrasonic testing, echoes of sound energy reflected by the pits is converted to electric pulses, which reveal the location and dimensions of the pits.

How To Prevent or Minimize Pitting

The following steps can be taken to minimize and prevent pitting corrosion.

Take steps to minimize the chloride concentration in the service environment, especially where they may come into contact with metallic surfaces.

Control the temperature of the indoor environment so that it does not reach the critical pitting temperature level for the material.

Use a protective coating on metallic surfaces.

Polish the surfaces if they are accessible, because polished metallic surfaces have a higher resistance to pitting corrosion.

How to Fix Pitted Surfaces

Corroded surfaces and pits should be thoroughly cleaned to render the surface free from corrosion debris. Pits may be cleaned with the help of wire brushes and pointed tools. After inspecting the surface for cleanliness, a primer application can be planned and completed. A top coating may be applied subsequently. Primers based on zinc phosphate are the first choice for protecting metals from pitting corrosion. Zinc spray coating and galvanization by hot dipping are the other preservation techniques adopted for preventing pitting corrosion.

Though barely visible, pitting corrosion can have serious implications because the cavity it bores below the surface can be both wide and deep, thus seriously affecting the load carrying capacity of the structure.

When the passive film that normally protects the metallic surface from corrosion breaks down and does not heal itself, a tiny pit is formed at that location. Metals at risk are those that depend on a passive oxide film for their corrosion protection, such as aluminum alloys, nickel and stainless steel. Carbon steels normally fail due to uniform corrosion and not by pitting. The pitting reaction is accelerated due to a high concentration of ions such as chlorides and high operating temperatures.

Pitting corrosion can be prevented or minimized by choosing materials with high pitting resistance that match the service environment. Keeping service temperatures below the critical pitting temperature of the chosen material is also an important factor.