The identification of corrosion products can help prevent future occurrences and will impact the decision to change metallurgy or modify the process conditions.

Pourbaix diagrams can be a useful tool for determining anticipated aqueous corrosion products, which can then be compared to the ones observed. Thermodynamic equilibrium is used to predict phase stability in an electrochemically controlled system. The Pourbaix diagram is akin to a phase diagram that shows the stability boundaries for a metal-aqueous system where phase stability is related to pH and standard hydrogen electronic potential. 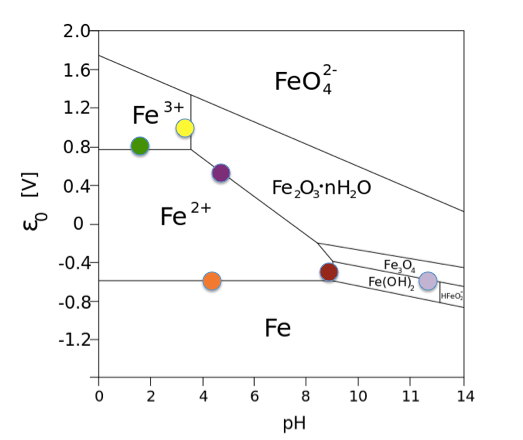 These diagrams are very useful for identifying where the metal may be active or passive to corrosion. With the advent of improved thermodynamic data, alloy Pourbaix diagrams using CALPHAD methodology are available and can be used to indicate potential corrosion or protective scale species. They can assist in understanding the observed corrosion products based on the oxidation state of the predicted species in solution and the anticipated protective scale. If there are inconsistencies, then the process conditions or corrosion chemistry were not correctly specified.

More recently, energy dispersive spectroscopy (EDS) has been used to identify corrosion products, but this method also has the shortcoming that it only identifies elements, not compounds. The compounds must be inferred by EDS, which is almost impossible if the sample has several forms of iron sulfides. Thus, the simple oilfield methods often used for corrosion product identification are frequently misleading. They should not be relied upon to make serious decisions regarding the condition of equipment or the causes of corrosion in a system. X-ray diffraction (XRD) must be used to positively identify and understand the corrosion products present.

Iron and mild steel in water will develop insoluble corrosion products of magnetite (Fe3O4), lepidocrocite (g-FeOOH) and goethite (a-FeOOH) depending on the pH. The amount of each constituent can vary with temperature. Aerated acidic 200 ppm chloride solutions at 25°C (77°F), such as from weathering, produce a rust layer consisting of hematite (a-Fe2O3) and magnetite.

The presence of SO4= produces lepidocrocite, magnetite, hematite and goethite corrosion products and with shorter times ferrihydrite (Fe5O7(OH)·4H2O), which is not very thermally stable and readily transforms to goethite and hematite.

Aqueous CO2 corrosion tends to produce FeCO3 deposits at lower temperatures. At temperatures above 100°C (212°F) both FeCO3 and magnetite are observed, but which dominates is a function of the partial pressure of CO2. In carbonate solutions, amorphous species and ferrihydrite, hematite, possibly FeCO3 and ferrous hydroxy carbonate (Fe2(OH)2CO3) may be observed.

Another study at 120°C (248°F) noted that with time the mackinawite transformed to troilite (FeS) and then to pyrrhotite and with further time to pyrite. In the absence of O2 and Cl, the cubic FeS may be an intermediary sulfide. These sulfide scales may also be observed as corrosion layers on the metal. The combination of a mixed H2S/CO2 solution tends to transform the pyrrhotite layer to troilite and some mackinawite. Thus, the growth and phase transitions of polymorphous iron sulfides with different stoichiometric Fe/S ratios and structures are very complex and are a function of exposure conditions.

In NaOH solutions hematite tends to be the dominant corrosion product.

For these alloys a uniform 1-3 nm thick Cr2O3 film passivates the metal surface and minimizes staining and corrosion. If this protective film dissolves and/or is breached, then corrosion can occur with the corrosion tending to be a pitting attack. (Related reading: Preventing Tea Staining Corrosion of Stainless Steel.)

Because of the limited quantity of corrosion products, most identifications of the corroding species are achieved with SEM-EDS. XRD analysis of the deposits from HCl corrosion reveals FeCl2, hematite and Cr2O3. Sea water exposure can produce hematite, magnetite and Fe(CrO4)OH. For higher Ni-alloys such as 904L in HF, the deposits consist of NiF2, hematite and Cr2O3. In sulfuric acid Type 304 produces a passive film of oxyhydroxides, hematite, FeO, NiO, sulfate, sulfite and Fe and Ni sulfides.

An aqueous solution will oxidize pure copper with Cu2O (cuprite) being the predominant insoluble product with Cu+2 being predominantly soluble species. The presence of chloride will enhance solubility of Cu(I) such that CuCl2- becomes the dominant soluble species. In a marine environment, cuprite is initially formed; further interaction with Cl- produces nantokite (CuCl), which then can transform to atacamite or the isomorphous phase paratacamite (Cu2(OH)3Cl) as the end patina corrosion product.

In sulfur polluted environments, cuprite will initially form but there may also be Cu4SO4(OH)6.H2O, Cu4SO4(OH)6 (brochantite), and Cu3SO4(OH)4 in the corrosion product. If H2S is present in a reducing environment such as in the case of microbially induced corrosion (MIC), CuS or Cu8S5 may result.

Cu and Zn are the main elements in the brass family of alloys. Because of the considerable equilibrium potential difference of Cu and Zn, dealloying of Zn can occur in aqueous environments resulting in a Zn depleted layer and Cu and Zn corrosion products. Typically these include cuprite, CuO, Cu(OH)2, ZnO and Zn(OH)2. In marine environments, amorphous zinc hydrocarbonate, Zn5(CO3)2(OH)6 and ZnO can be observed.

The alloying of Sn to Cu results in the bronze alloy family. In aqueous media, SnO2 film can be semi-passive. The defective cuprite layer is then separated from the bulk alloy by an inner protective SnO2. In the presence of Cl- an outer nantokite is sometimes formed but with longer times in a marine environment CuO, Cu2CO3(OH)2 and atacamite may be produced and in polluted waters brochantite may also be present.

Copper nickel alloys are known for their corrosion resistance. In a marine environment cuprite will rapidly form initially and potentially be protective; but with exposure to Cl-, nantokite, CuCl2 and paratacamite are produced. In aerated sulfide containing seawater, the most significant specie is Cu2S with mixtures of nantokite, NiS, cuprite and NiO. (Related reading: 11 Uses for Cupronickel and Why You Should Be Using It Now.)

Nickel-based alloys are selected for aggressive corrosive environments where stainless steel is not suitable. By alloying Ni with various amounts of Cr and Mo and small amounts of W, Cu and Fe, high corrosion resistance can be achieved. The thin passive film consists of an inner Cr2O3 rich layer and an outer layer of Cr/Ni hydroxides and Mo/Cu or W, which provide the corrosion protection. Electron diffraction analysis suggests that these moieties are Ni1-xCr2x/3O and b-Ni1-xCr2x/3(OH)2 with Mo possibly substituting for some of the Cr.

Under aggressive conditions defects in the protective film can allow localized breakdown and with no re-passivation, metal dissolution can occur with subsequent pitting or crevice corrosion. Corrosion products inside a crevice for Alloy 22 exposed to hot chloride brine was found to be MoO2 and Mo4O11; W may be substituted in the molybdate or as a separate oxide species.

How to Effectively Recognize, Prevent and Treat Pitting Corrosion

Important Facts You Might Not Know About Copper Patina