Materials science research, particularly in the last decade, has shown exciting promise for the future of the corrosion control industry.

Corrosion is a highly complex process involving a variety of chemical, electrochemical and even biological reactions. This destructive process costs numerous industries millions of dollars each year.

According to NACE's International Measures of Prevention, Application, and Economics of Corrosion Technology (IMPACT) study, the total global cost of corrosion is estimated to be US$2.5 trillion. Various factors, including microstructure, chemical composition and environmental factors, govern the susceptibility of a particular material to develop corrosion.

As such, there is a growing demand for new material technologies, corrosion protection methods and evaluation approaches. In recent years there have been several developments and discoveries in the field of materials science, many of which have exciting possibilities with regard to corrosion resistance and protection.

In this article, we will explore the latest and most promising developments in the materials science industry and discuss what they mean for the future of corrosion control.

Nickel is one of the most abundant naturally occurring metals on earth. It is used in a wide range of industries in numerous applications due to its desirable properties. In addition to being durable, magnetic and an efficient conductor of heat and electricity, nickel is also extremely corrosion resistant.

While scientists have known for a while that nickel, despite its corrosion resistance, is corrodible, a discovery by a team of researchers at Texas A&M University found that nickel corrosion occurs in a way that had not been previously observed.

This discovery has flipped decades of assumptions on metal corrosion because, for years, materials scientists have worked to create metals that contain as many coherent twin boundaries as possible. This research has the potential to improve the fundamental understanding of corrosion mechanisms, leading to better corrosion analyses, predictions and even the production of more corrosion-resistant alloys. (Some other corrosion resistant metals are examined in Your Guide to Corrosion-Resistant Metals.)

Specific metals are known for their ability to produce protective metal oxide layers when exposed to air and moisture. These layers act as barriers that prevent corrosion by preventing further air and moisture from coming into contact with the metal's surface.

While it was widely accepted that aluminum oxide, chromium oxide and silicon dioxide were highly efficient corrosion-resistant metal oxides, it wasn’t until researchers at MIT observed them using special instruments that the behavior of these oxides was fully understood.

It was observed that deflections in the metal due to pressure resulted in cracking of the protective oxide layer. This, in turn, allowed oxygen to penetrate the barrier and initiate corrosion. However, MIT researchers observed that thin layers of aluminum oxide (approximately 2 to 3 nanometers thick) exhibit flow-like behavior. This allows the self-healing metal oxide to stretch or elongate up to twice its original length under pressure, eliminating cracking in the oxide layer and keeping the substrate covered and protected.

This discovery has the potential to revolutionize the application of corrosion protective coatings, especially for structures under pressure such as tanks, process vessels and nuclear reactors. (See A Look at Self-Healing Metal Oxides as a Corrosion Prevention Method for more information.)

The discovery of compositionally complex alloys (CCAs) at the turn of the millennium has fueled research into the benefits and applications of this material. Unlike conventional alloys that contain alloying elements in relatively small quantities, CCAs contain five or more metal elements in equal or near-equal amounts in terms of atomic proportions.

While the corrosion protection mechanism of CCAs is not yet fully understood, it is believed that their superior corrosion resistance is due to their high reactivity, which leads to quick oxidation and the rapid development of protective oxide films. The multiple elements that participate in passive film formation also contribute to the effectiveness of the oxide film.

While CCAs are a hot topic, a complete property portfolio is yet to be developed for engineering applications. Significant research is ongoing to rationalize the corrosion mechanisms and surface film properties developed in these complex alloys. However, there is no doubt that these materials will play a vital role in future corrosion protection techniques.

Alternatives to Steel in Reinforced Concrete

One of the major factors affecting the durability of reinforced concrete is the corrosion of traditional steel reinforcement. (For an introduction to this topic, see Corrosion Resistance in Reinforced Concrete Structures.) This issue is especially crucial in marine environments, where salts can penetrate porous concrete structures and work their way down to the reinforcement level. 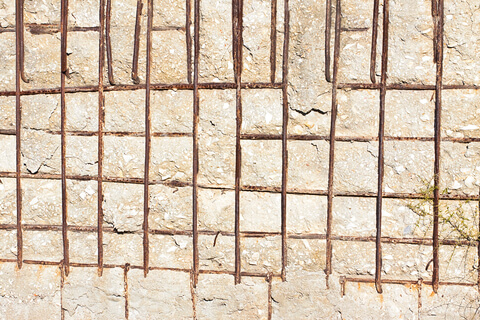 One ways to address reinforcement corrosion in concrete is to replace the steel reinforcing bars with a non-corroding material. While alternative reinforcing is currently available in the form of galvanized steel, stainless steel and epoxy-coated reinforcement, they are usually costly.

Technological advancements are currently ongoing regarding the use of synthetic fibers as a form of reinforcement in concrete structures. These fibers are distributed throughout the concrete member, turning it into a fiber reinforced composite material. The fibers serve to increase the shear strength and tensile strength of the material.

Because synthetic fibers do not contain any metallic elements, they do not suffer from the effects of corrosion, thus maintaining their performance regardless of the exposure environment. While synthetic fibers are currently only used as temperature/shrinkage reinforcement, research is continuing to increase the applicable uses of these fibers.

Materials science research, particularly in the last decade, has shown exciting promise for the future of corrosion protection. While some of these developments have not resulted in commercially available products just yet, they are expected to eventually revolutionize the corrosion control industry.