Different types of corrosion can have significantly different effects on metal construction materials. Exercise care when designing, constructing and maintaining structures that are prone to corrosion.

Modern construction materials have a number of well-defined mechanical properties that can tell us a lot about their characteristics and behavior when used in construction. However, the story is far from complete because of newly developed materials whose behavior is still unknown and because we discover new damage mechanisms as we create more and more advanced applications with new environments and modes of operation.

Most of these properties are explained on a microscopic level, but their true nature is best understood on a macroscopic level, through numerous mechanical tests and, unfortunately, experience. These tests are commonly performed using standardized test specimens and test equipment that give us accurate estimates of various characteristics we define, such as material strength, toughness, hardness, resilience and ductility. All of these properties are mutually dependent, and only have use in helping us describe the different qualities of a material – they are not separate, independent mechanical properties. Enter composite materials, and the whole story becomes even more complicated. (For a quick look at composites, see Galvanic Corrosion of Metals Connected to Carbon Fiber Reinforced Polymer.)

One of the oldest properties we defined is that of the material’s strength, which comes in two flavors: compressive and tensile strength. Tensile strength is one of the most important mechanical properties for any sort of modern construction, as it defines the breaking limit of a material under tensile stress (an aspect to which most materials are more vulnerable than to the effect of compressive forces). Without an accurate knowledge of this value, we cannot even dream of designing a structure that would be within a predetermined margin of safety with adequate reliability.

To determine how corrosion affects tensile strength, we need to observe two parts of the problem:

The Nature of the Mechanical Properties of Metals

Most, if not all properties defined so far are observed in steels, aluminum alloys and other metals commonly used in construction and engineering. For that reason, it is easiest to explain these mechanisms and their interaction with a typical example, such as construction steel.

There are two levels of scale that play a role here: the crystal lattice of a metal, comprised of a number of atoms arranged in a pattern (usually a cube, but other patterns exist), and on a grain level, a crystalline structure comprised of a large number of individual lattices. These grains can have varying grain sizes, often down to the microscopic level.

It is not necessary to spend too much time here debating the basic atomic level of this problem: suffice to say that these lattices are not perfect. Sometimes atoms are missing, or they are substituted with other atoms (substitutional defect) or there are atoms stuck inside of the lattice (interstitial defect), all of which have different and significant effects on the properties of the metal. In fact, these imperfections are exactly what make it possible for us to influence the characteristics of a metal by alloying, and by mechanical and thermal processing, but these effects are individually less visible than on the grain level. The defects mentioned here are the so-called point defects, while other levels, such as line, planar or bulk defects are also always present in some measure.

The microstructure of a material is far from homogeneous, even on microscopic level. Crystalline defects can allow the flow of the material, or trap it and be an obstacle to crack propagation and deformation, and be responsible for residual and internal stresses. (Related reading: The Effects of Stress Concentration on Crack Propagation.) Besides the chemical composition of a material, these inhomogeneous lattice and grain structures are responsible for the wide variety of properties we get from some materials.

It would be virtually impossible to study and record every single lattice in a metal and try to establish its properties based on them. For that reason, it is more prudent to observe the microstructure on a granular level. These grains are multifaceted, with different possible shapes, internal structure and size, all of which influence the material’s mechanical properties in a certain way. Generally, the smaller the grains, the better the mechanical properties – that is the reason why, as a rule, high-strength steels have a very fine microstructure. 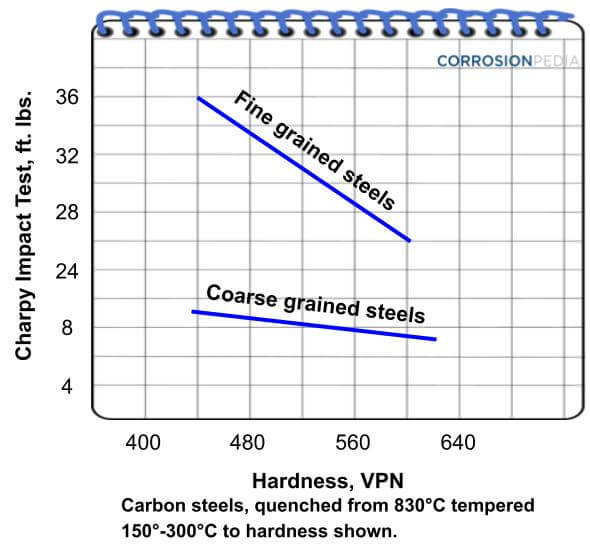 Tensile strength by definition is “the resistance of material to breaking under tension.” In terms of mechanics, this means that tensile strength is the stress value that a material can endure before it breaks. There are different modes of material breaking; depending on the type of material, the failure can be ductile where first the material experiences plastic deformation or brittle failure with no prior deformation.

On an atomic level, tensile strength is the strength of the attractive forces between the atoms and lattices that oppose any outside forces that affect the material in the direction of the attack of the said forces.

Influence of Corrosion on the Structure of Materials

As is well established, corrosion is a chemical or electrochemical degradation of material, caused by the interaction of the material with the environment. In the case of steels this usually stems from a presence of oxygen and an electrolyte, such as water or saltwater, which are inevitable occurrences in a marine environment or in water pipelines. (Read about Corrosion Fatigue of Welded Joints on Marine Offshore Structures.)

In theory, protective coatings, sacrificial anodes and passivation can reduce or completely negate corrosion, but unfortunately, in any real-life scenario, numerous other factors, such as temperature, variable loads, vibration and microbial activity greatly reduce the effectiveness of these protection methods. The effects of corrosion on crack propagation are significant.

In the case of uniform corrosion, assessing its influence on the material’s structural strength is straightforward. One should establish the reduction of the thickness and the weight-loss of the plate or beam in question, and calculate the stress for a given load for a new, reduced, cross section of the steel member. The matter is far more complicated for localized corrosion, where the localized stress fields play a much larger role and directly affect the tensile strength of the material itself.

To better illustrate this, a case study done by Nakai, Matsushita, and Yamamoto on a hold frame of a 14-year-old bulk carrier showed that:

On the other hand, examination of corroded reinforcing steel bars in a study done by Almusallam showed a significant reduction of ductility, and the specimens with more than 12.6% showed considerable brittle behavior compared to the control specimens. In addition, these bars showed reduced elongation. After a certain point (when more than 40% of the material is corroded), these rebars showed preferential corrosion, with a relatively short section showing thinning and notch formation, but these could be attributed to cracked concrete and other environmental factors not directly related to corrosion. This reduction in rebar thickness significantly reduces its load carrying capacity, while the brittle mode of failure makes the situation far more dangerous due to the much faster propagation of cracks in such a material.

While corrosion has a marginal effect on the ultimate tensile strength of a material, there is a strong correlation between corrosion and a reduction in ductility and an increase in brittleness of the material, which in turn can change the failure mode from a ductile to a much more dangerous brittle failure. In addition, reduced cross-section and stress concentrations caused by corrosion can greatly influence the load carrying capacity of the particular member and the structure as a whole. (Related reading: 6 Tests to Measure a Material's Strength.)

Different types of corrosion can have significantly different effects on a structural member, which sadly means that we can only examine these effects on a case-by-case basis, significantly slowing down our understanding of the problems at hand. There is a significant danger in leaving even seemingly benign corrosion unchecked, so care should be taken when designing, constructing and maintaining structures that are prone to corrosion.