What Does Face-Centered Cubic (FCC) Mean?

Face-centered cubic (FCC or cF) is the name given to a type of atom arrangement found in nature. A face-centered cubic unit cell structure consists of atoms arranged in a cube where each corner of the cube has a fraction of an atom with six additional full atoms positioned at the center of each cube face.

The atoms at the corner of the cube are shared with eight other unit cells. As such, each corner atom represents one-eighth of an atom.

The atoms at each face of the unit cell are shared with adjacent unit cells; therefore, each face atom represents half of an atom.

Using this concept, the total number of atoms in the FCC unit cell structure is 4; six halves at each of the faces, plus eight one-eighth atoms at the corners.

Face-centered cubic may also be known as cubic close-packed (ccp).

Metal atoms naturally pack themselves in a close arrangement to form the strongest metallic bond possible. In nature, several packing arrangements are possible, including the face-centered cubic arrangement.

One of the defining features of FCC is that the atoms are packed as close together as theoretically possible. The atoms from one layer nest themselves snugly into the empty space of each adjacent layer.

This close packing arrangement is quantified in FCC’s packing density.

Some metals that possess this crystalline structure include aluminum, gold, lead, platinum, iridium and silver. 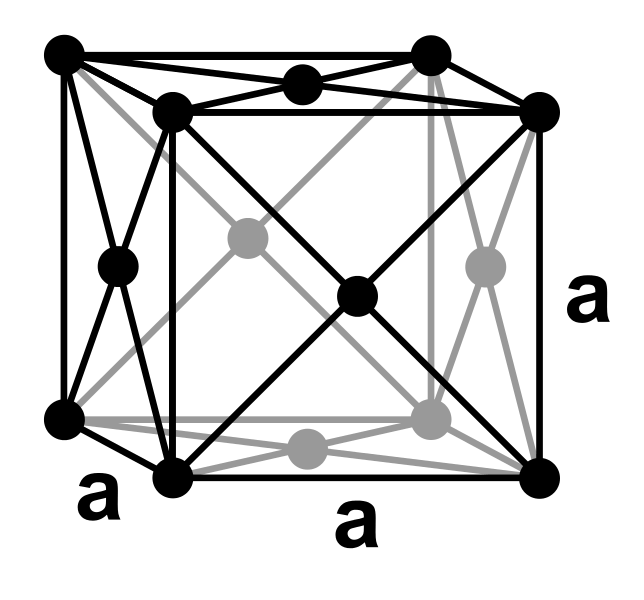 The packing density, also known as the atomic packing factor (APF), is essentially the fraction of the volume of atoms that occupy a crystal structure.

Because each atom is represented as a sphere and the unit cell is a cube:

To further break this down, we can express “a” in term of “r”.

Taking this result for “a” and putting it back into the formula for APF, the equation becomes:

Cancelling common terms, we get APFFCC = 0.74. In other words, 74% of the volume of the unit cell is occupied by atoms. This value is referred to as close-packed because it is not possible to pack the atoms any closer to achieve a higher APF.