The steel reinforcing bars in reinforced concrete structures are vulnerable to corrosion; however, several techniques can greatly improve its corrosion resistance and performance.

Though the steel reinforcement (rebar) is embedded in the concrete, it is still vulnerable to corrosion. This concrete corrosion deteriorates the bars; thus reducing the overall load carrying capacity of the structure and increasing the likelihood of structural failure or collapse.

The History of Reinforced Concrete

While plain concrete has been used as a construction material since the ancient Roman era, the concept of using reinforcement wasn’t introduced until the late 1850s, when French industrialist, François Coignet, introduced the use of iron reinforcing bars. Then, in the 1880s, German civil engineer, G. A. Wayss proposed that iron bars be replaced in favor of steel reinforcement.

Reinforced concrete is one of the most versatile and widely used material in modern construction. It is essentially concrete in which steel bars, rods or mesh are embedded such that they act as one material. Plain concrete, while strong in compression, is relatively weak in tension, making it unsuitable and uneconomical for many building structures. Steel reinforcement compensates for this weakness by bonding with the concrete, allowing the two materials to work together to resist applied tensile stresses. Steel reinforcement can also be used to increase the concrete’s ability to withstand shear and compressive forces. (These forces are discussed in more detail in the article The Effects of Corrosion on the Shear Behavior of Materials.)

Why Does Reinforced Concrete Corrode?

While concrete may seem like a solid material, it is naturally porous. This characteristic makes concrete susceptible to infiltration from various unwanted substances that may accelerate the corrosion of the embedded rebar. Additionally, as fresh concrete dries its volume changes, causing it to develop several fine cracks that can act as another opening for corrosion-causing agents.

One of the most extensively documented causes of reinforcement deterioration is corrosion due to the presence of chloride ions. These contaminants are typically introduced into the concrete from deicing salts, seawater or chloride-containing admixtures. Chloride ions permeate through the pores or cracks of the concrete until they reach the steel reinforcement. In the presence of oxygen and moisture, these ions initiate a series of corrosion reactions. While the mechanism by which chlorides accelerate rebar corrosion is not fully understood, it is believed that chloride ions penetrate and dissolve protective oxide films easier than other ions.

Corrosion in reinforced concrete can also occur if the pH of the concrete is decreased. Concrete's naturally high pH, which usually ranges between 12 and 13, creates an environment that promotes the formation and growth of protective oxide films that prevent the dissolution of metal ions. Reducing the pH value of the concrete to as low as 8.5 can cause the passive film to become unstable, leaving the reinforcement vulnerable to corrosion attack.

One of the most common reasons responsible for concrete pH reduction is carbon dioxide (CO2) infiltration. This process, known as carbonation, occurs when carbon dioxide in the atmosphere reacts with hydroxides (calcium hydroxide) in the concrete to form pH-reducing carbonates. (Carbonation is also discussed in Correcting and Preventing Concrete Corrosion.)

Carbonation also significantly lowers the concrete's resistance to chloride ions. In fresh concrete, the amount of chloride ions needed to initiate corrosion is usually between 7,000 to 8,000 parts per million (ppm). However, if the pH is lowered to between 10 and 11, the chloride ion threshold can drop to 100 ppm or less.

How Does Reinforced Concrete Corrode?

When the oxide film surrounding the reinforcing bars dissolve due to chloride attack, carbonation or otherwise, parts of the steel become reactive, forming a corrosion cell. The active locations on the rebar become the anode and lose electrons to the surrounding concrete as ferrous ions. This half-cell oxidation reaction is represented by the following chemical equation:

While the opposing half-cell reduction reactions at the less reactive sites (cathodes) is represented by: 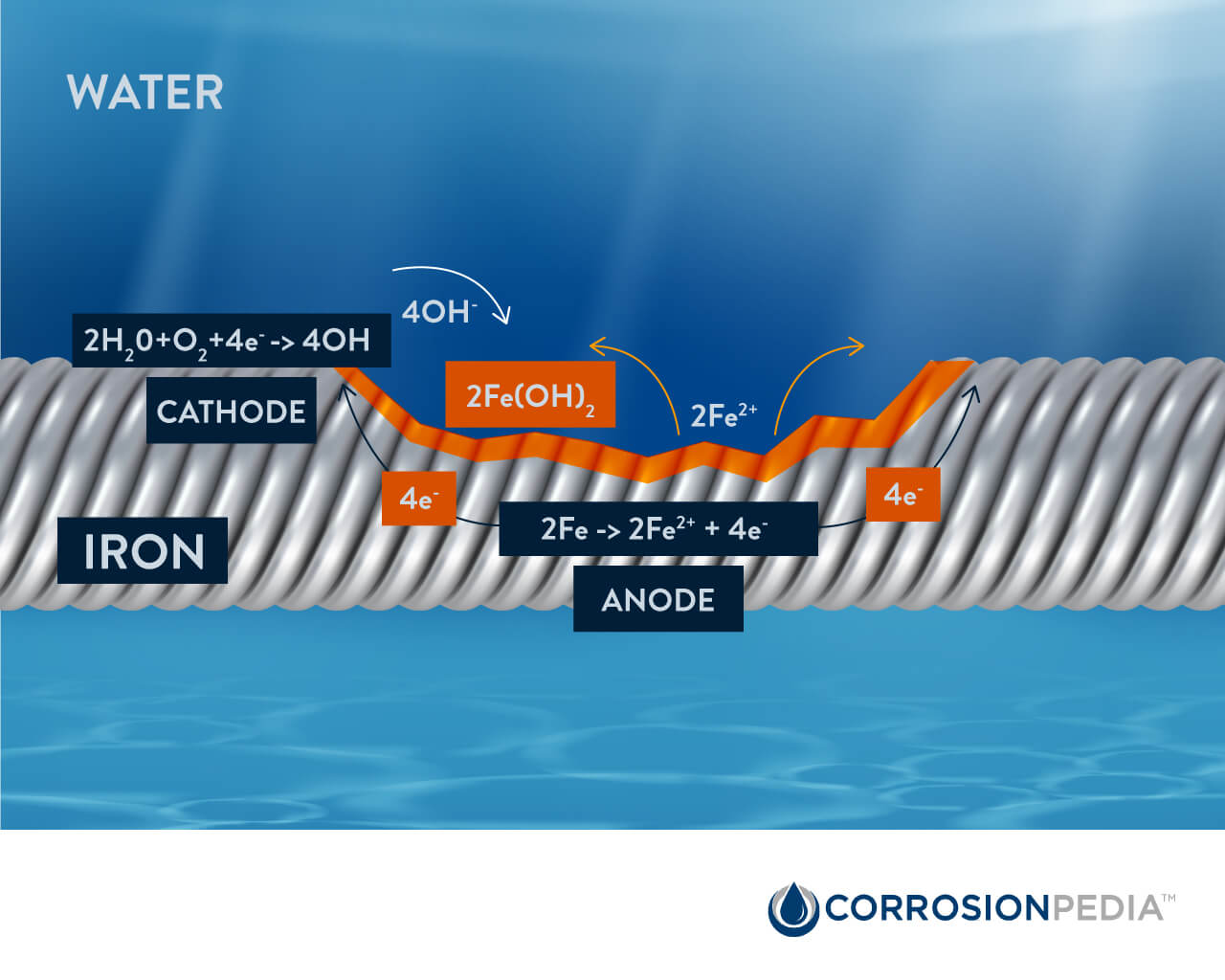 As the steel corrodes, the metal dissolves, resulting in a reduction in the cross section of the reinforcement and an overall decrease in strength. The resulting corrosion products that form around the rebar occupy a greater volume than the steel. This volume expansion creates a tensile stress in the surrounding concrete, which can promote cracking in the vicinity of the corroded bar. Continued expansion can eventually cause chunks of concrete to be expelled from the structure in a type of failure known as spalling. 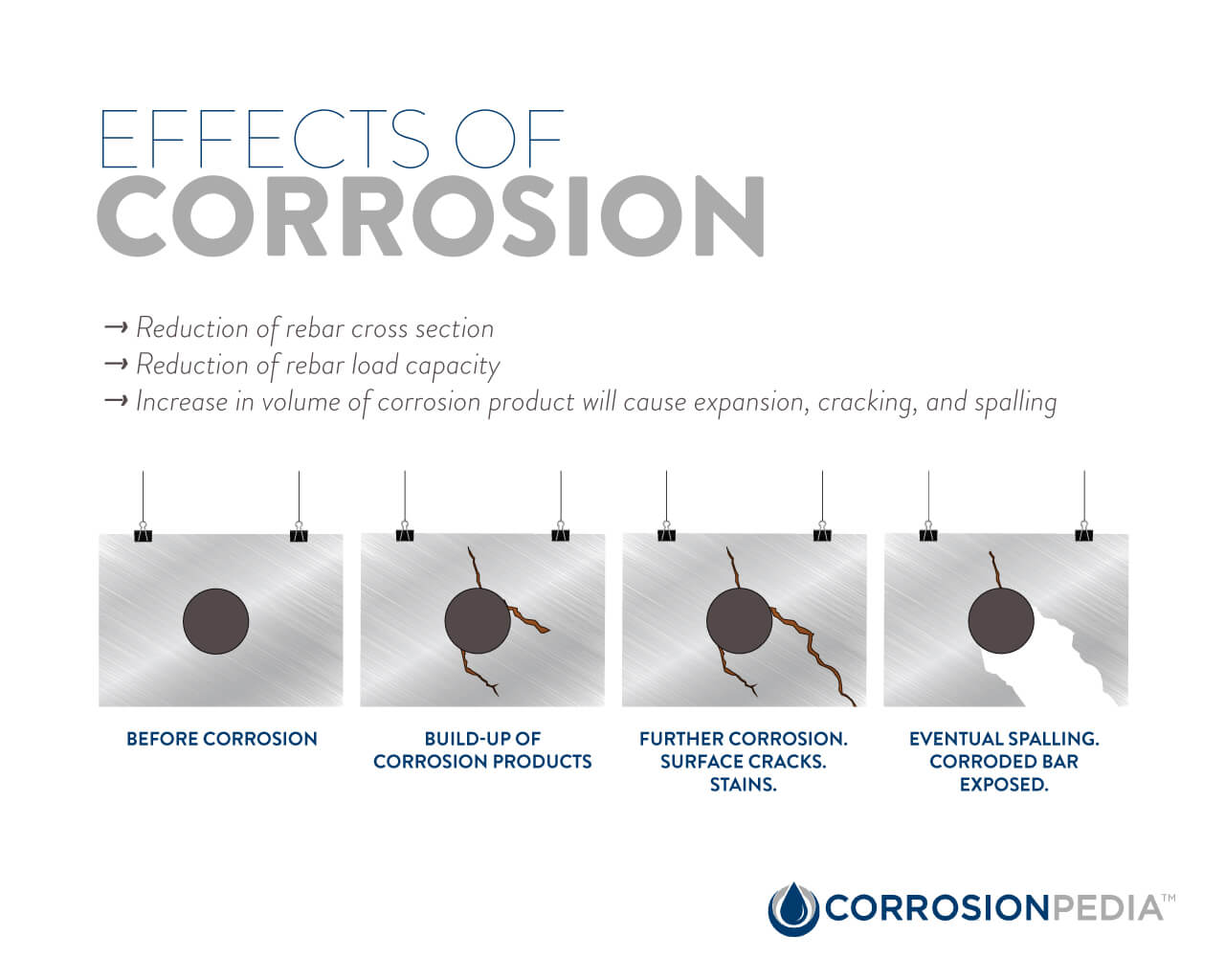 Figure 2. Diagram of the progressive effects of corrosion on reinforced concrete.

Methods to Improve the Corrosion Resistance of Reinforced Concrete

There are several methods to increase the corrosion resistance of reinforced concrete structures. The first layer of defense typically involves modifying the properties of the concrete mixture itself. Dense concrete, with low porosity and permeability, reduces the ability of contaminants to infiltrate to the level of the steel reinforcement.

Low-permeability concrete mixtures are usually achieved by using pozzolans and slag (e.g., fly ash). When added to concrete, these compounds decrease the water to cementitious materials ratio and produce additional compounds that reduce the pore interactivity of concrete. This prevents sulfate and chloride from penetrating into the concrete. Some pozzolan and slag materials are also known to reduce shrinkage cracks, which also act as an opening for corrosion-causing contaminants.

The next line of defense against reinforcement corrosion attack is ensuring that adequate concrete cover is provided. Cover, which refers to the distance of the steel reinforcement to the outer edge of the concrete, is usually 3/4 inches to 1 1/2 inches (19 to 38 mm) in normal conditions depending on the bar size. However, in highly corrosive environments, such as near seawater, the cover can be as large as 3 inches (76 mm).

The larger the cover, the deeper the reinforcement is embedded in the concrete, and the better the level of protection offered. Increased reinforcement cover is usually supplemented with the use of low-permeability concrete.

While reinforced concrete is a versatile and durable construction material, its steel reinforcing bars are vulnerable to corrosion attack. Advanced deterioration can result in a reduction in strength, spalling, and in extreme cases, structural failure.

This corrosion is typically initiated by chloride ion penetration or a pH reduction due to carbonation. However, several measures, including using low-permeability concrete, providing adequate cover, and using corrosion resistant reinforcement can help improve the performance of reinforced concrete structures in aggressive and challenging environments.