What Does Endurance Limit (Se) Mean?

For example, bolts that are used to hold down machinery are often vulnerable to fatigue. As the machinery vibrates, the bolts experience repeated back and forth load cycles. Eventually this loading can lead to fatigue in the bolt, where the material eventually weakens and the bolt fractures. This action is very similar to bending a paper clip back and forth until it breaks.

However, if the bolt experiences a cyclic loading that is below its endurance limit, it can be expected to endure an infinite amount of vibration without developing cracks or experiencing fatigue failure.

Not all materials have an endurance limit. For example, rigid, elastic, low damping materials, like some thermoplastics or thermosetting plastics, have a very low or non-existent endurance limit.

Endurance limit should not be confused with fatigue strength. The former is a stress limit for infinite load cycles, while the latter describes the maximum stress for a specific number of load cycles.

Endurance limit may also be known as fatigue limit.

To better understand the endurance limit, it is first worthwhile to understand fatigue in metals.

Fatigue occurs when a metal is subjected to repetitive loading. This load is usually substantially below the yield stress of the material. However, the cyclic action serves to weaken the material, causing it to eventually fail.

Fatigue occurs because most known materials contain defects, in one form or another, at the microscopic level. The defects act as stress risers, causing stress concentrations to develop at local regions. These amplified stresses cause microscopic cracks to form and propagate, eventually leading to fracture.

However, if the stresses applied to the material are low enough, then the material will not experience fatigue under repeated cyclic loading. 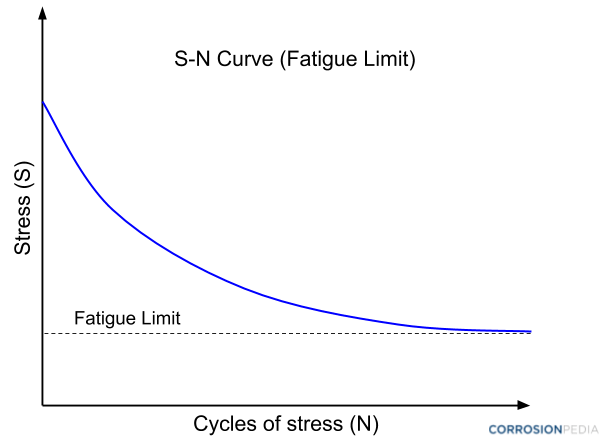 How Endurance Limit is Measured

The endurance limit of steel and other materials can be measured using several different testing methods. All tests, however, apply the same basic principle.

First, the test sample is loaded onto the testing device that applies a repeated and predetermined alternating stress to the sample until failure. The applied loading is gradually reduced until the sample undergoes a large number of load cycles (usually around 107 to 108) without showing signs of fatigue failure.

How can I determine and measure steel's endurance limit?
Advertisement