The Relationship Between Corrosion Fatigue and Stress Corrosion Cracking

While corrosion fatigue and stress corrosion cracking can occur under different circumstances, they are recognized as being part of the same continuum. Together, these two phenomena have been known to co-occur, causing numerous failures in a wide variety of industries.

These failure mechanisms, both of which can be sudden and catastrophic, are the subject of extensive scientific and engineering research. However, to understand how corrosion fatigue and stress corrosion cracking interact, one must first understand the mechanisms involved in each corrosion type.

What is Stress Corrosion Cracking (SCC)?

SCC is defined as cracking that occurs due to the interaction of mechanical stress and corrosion. The stresses induced in the material in a corrosive environment produces more damage than either element acting alone. As such, the mechanisms in SCC are said to be synergistic. While SCC is most commonly found in metals, it can also occur in other materials, such as polymers and glass.

SCC is classified as catastrophic because reductions in material strength and subsequent structural failure can occur with very little or unnoticeable material loss. (Learn about the interaction between corrosion and strength in the article Effect of Corrosion on a Material's Tensile Strength and Ductility.) Typically, minute corrosion cracks form just at the grain boundaries of the material, while the rest of the surface remains unattacked. As a result, SCC damage is often difficult to detect during casual inspections, and the extent of the damage is not easily predicted.

The catalyst for SCC is primarily the lack of passivity along the grain boundaries of some metals. Grain boundaries are thought to be less passive than the bulk of the material due to the segregation of impurities at these locations. These impurities alter the material’s microstructure, making it difficult for passivation to occur at the boundary interfaces.

For example, in some austenitic steels, the local concentration of chromium at the grain boundary can be considerably less than at the bulk material surface. As a result, grain boundaries are likely to possess less passivation than the rest of the material, thus providing an active path for corrosion. The application of external stresses then serves to open up cracks in these weakened areas. (For more on this subject, see The Role of Chromium in Intergranular Corrosion.)

What is Corrosion Fatigue?

Corrosion fatigue occurs when a metal object is subjected to alternating or cyclic stresses in a corrosive environment. (For one possible solution, read Nitriding for Corrosion and Wear Fatigue Resistance.) Contrary to conventional mechanical fatigue, there is no fatigue limit in corrosion fatigue. In other words, the stress level at which a material is assumed to resist infinite load cycles does not exist.

While material fatigue in itself is dangerous, corrosion fatigue is more so because failure can occur at significantly lower stresses and in a much shorter timeframe than conventional fatigue.

Corrosion fatigue is believed to be caused by the rupture of the material’s protective passive film. In addition to material weakening due to cyclic loading, the oxide layer also becomes damaged due to alternating tension and compression. The loss of this protection invites more corrosion, further lowering the material’s strength and shortening its lifespan.

Corrosion fatigue results in the formation of transgranular cracks that can eventually lead to brittle fracture. However, unlike its SCC counterpart, the cracks are more localized and are not branched.

How are Corrosion Fatigue and SCC Related?

Corrosion fatigue and SCC are similar in many aspects. However, the primary difference between the two is the character of the imposed loading. SCC is usually due to static tensile loading, while corrosion fatigue is the result of repeated and alternating cyclic loading. While the boundary between these two types of corrosion can be vague, they can often occur together with disastrous consequences.

SCC serves mainly to reduce the load carrying capacity of the material. During this event, corrosion occurs at the grain boundaries, producing very little evidence of deterioration on the surface of the material.

Crack initiation occurs when the material experiences an initial tensile stress, causing the weakened grain boundaries to "open up." Once the initial cracks have formed, cyclic/alternating loading serves to propagate them throughout the material during regular operation. (Related reading: The Effects of Stress Concentration on Crack Propagation.) This process can be further subdivided in three ways as follows:

Stress corrosion fatigue is a combination of pure mechanical fatigue and stress corrosion cracking. In the figure below, the black line represents pure mechanical fatigue. When the applied stress intensity exceeds the SCC cracking threshold, the crack growth velocity increases significantly due to the presence of corroded grain boundaries (as evidenced by the red line). 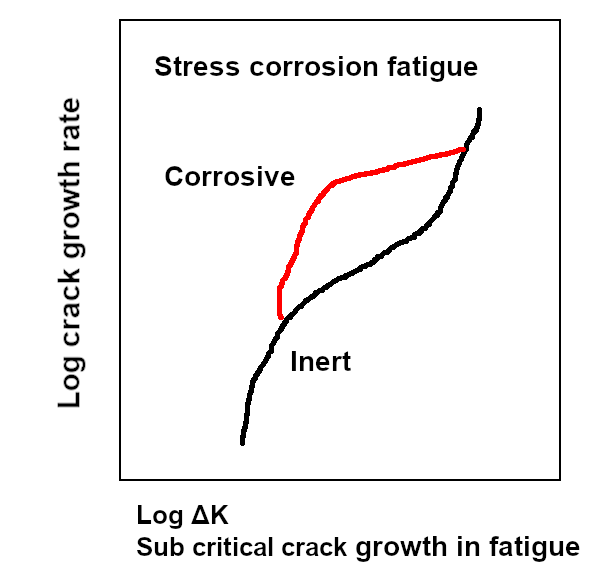 True corrosion fatigue refers to corrosion fatigue without the influence of SCC. In the diagram below, the black line represents pure mechanical fatigue. When a corrosive environment is present, the curve shifts to the left to indicate that cracks are now formed at lower stress levels. 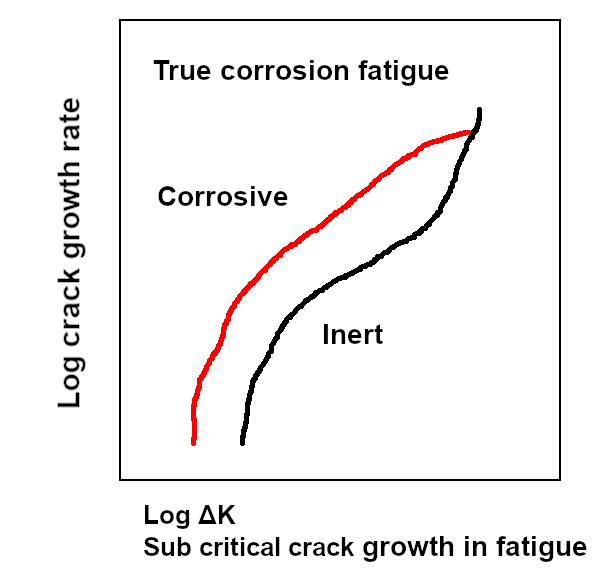 In some cases, however, corrosion fatigue and stress corrosion cracking can occur simultaneously to exhibit unique and accelerated crack growth. Figure 3 illustrates this behavior, where the red line is a superposition of the crack growth rates expressed in Figure 1 and Figure 2. 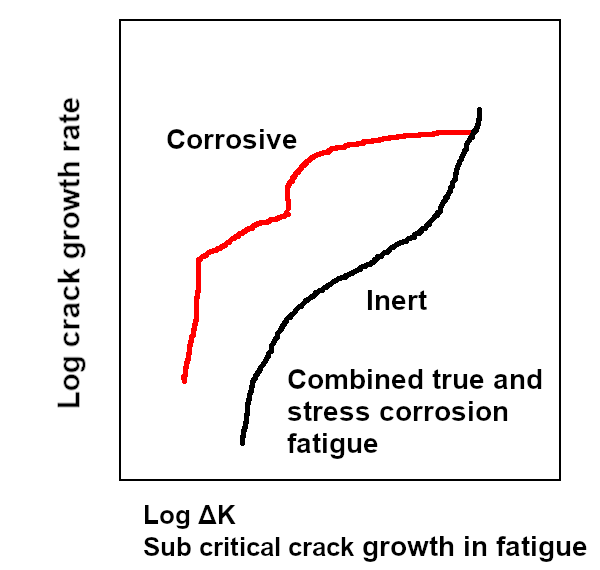 Corrosion fatigue and stress corrosion cracking (SCC) continue to plague numerous industries. Despite the progress that has been made in this field, researchers are still investigating the interactions between these two highly damaging types of corrosion. While there are methods to help avoid SCC and corrosion fatigue interaction, identifying and predicting failures remain challenging. It is, therefore, important that these two mechanisms are fully understood to avoid sudden and potentially catastrophic failure.