6 Tests to Measure a Material's Strength

Corrosion resistance and wear resistance are important factors, but equally significant is the strength of the material. Here are six common ways to measure a material's strength during material selection.

There are often several criteria that should be considered when selecting a material for a particular purpose. Corrosion resistance and wear resistance are important factors, but equally significant is the strength of the material. Material strengths vary widely across different material groups. Even within a given group, strengths can differ greatly depending on the alloying elements that were added and how the material was manufactured. Material strength is a very important attribute, so it is beneficial to know how materials are tested to measure their strength. Here are six common ways to measure a material's strength.

It is essential to prepare the specimen correctly prior to tensile testing. The test specimen is usually dumbbell-shaped, and should have a thicker cross section near each end because they are held in a clamp by the tensile testing machine. The area of the cross section in the center of the specimen must be known so the tensile strength can be quantified with a load/area measurement. (Learn more in An In-Depth Look at Tensile Strength.) During the actual testing, the material is pulled apart until failure occurs and the load that was applied is captured and recorded throughout the process.

The tensile test is usually measured in pounds per square inch or similar units. The modulus of elasticity, yield strength, ultimate tensile strength, ductility, strain hardening characteristics, Young's modulus and Poisson's ratio of a material can all be calculated with this technique.

When a material will be subjected to cyclic stress, such as shocks or vibration in a vehicle or equipment that is repetitively rotated during a mass production process, it is important to know how many load repetitions the material can handle before it becomes fatigued and fails. Fatigue testing is performed by taking a specimen of the material and subjecting it to an accelerated simulation of repetitive loading on a test machine such as a hydraulic fatigue tester. The repetitions are counted until material failure occurs. From this, the fatigue strength of the material is calculated using a stress-life diagram. 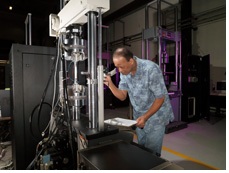 Torsion testing is used to determine how a material will react to forces that cause it to twist. A material possessing relatively high tensile or compressive strength may have little ability to withstand loads applied through torsion. (For further reading on this topic see What is the Difference Between Strength and Toughness?) Consequently, this type of test is important when selecting materials for fasteners, bridges and airplane wings, to name just a few.

When a torsion test is set up, one end of the specimen is attached to a clamp that holds it in a fixed position. The other end of the specimen is attached to a chuck that will rotate. In some instances, the material being tested may be attached to two chucks that rotate in opposite directions. The test specimen is then rotated either a specified number of degrees or until failure occurs. There are times when a compressive or tensile load is applied with the torsional load; this is known as axial-torsion testing.

Following either the failure of the specimen or the achievement of the desired degrees of rotation, the forces applied are collected and recorded as well as the total degrees of rotation. They are then used in conjunction with the dimensions of the specimen to calculate several mechanical properties such as ductility, shear strength (usually measured in pounds per square inch), the modulus of elasticity in shear and several other attributes. 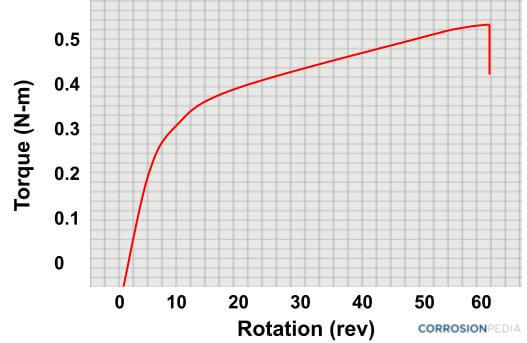 Nick break testing is a special type that lends itself to testing the strength of welded specimens. To perform a nick break test, the welded specimen has a small notch machined into it. Next, an object is impacted against the specimen causing it to fracture. This causes the weld to fracture. The nick break specimen is always broken in the weld metal portion of the specimen. While the ends may be the base material, the notch is always placed in the weld metal and that is where the fracture occurs. More specifically, it causes it to fracture through the path of least resistance, which is typically where a weld discontinuity will be found if there is one. The fracture face can then be examined to determine if a weld discontinuity did in fact negatively affect the strength of the weld.

Creep is a type of deformation that occurs when a material is placed under a load in high temperature environments. If creep is allowed to continue for a long enough time it can eventually cause material failure.

A creep test determines how a material will hold up to stresses when high temperatures are present. During a creep test, a material test specimen is machined in a fashion very similar to a tensile test specimen. The stress applied to the material is also usually a tensile stress; however it is not a stress large enough to cause material failure at typical room temperatures. The test environment is then raised to or beyond the temperature that the material will be subjected to during its actual application. 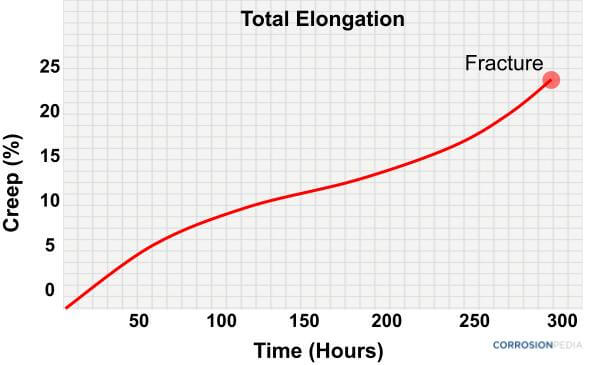 The time, temperature and amount of deformation are recorded during the testing process. These values are then taken and used to calculate how the material will perform in a high heat situation. The creep test is usually measured inch/inch/hour or percent of elongation/hour. Many raw materials can be subject to creep and eventually fail, including polymers, ceramics, concrete and metals, as well as the products manufactured from them, such as jet engine components, ovens and boilers.