An Introduction to Graphene Coatings

The coating industry, like many other industries, has experienced considerable growth and evolution over the years. The advent of new technologies, techniques, materials and skills have vastly expanded the range of applications for various types of paints and coatings, allowing them to adapt to the rapidly changing needs of consumers.

One such material that has revolutionized the way we formulate coatings is graphene. Since its introduction in 2004, this material has garnered significant attention among many professionals, particularly those in the field of materials science. (Learn more about materials science in the article How to Get Started in a Career as a Materials Scientist.) The fascination with this relatively new material stems from its unique combination of extraordinary physical, mechanical, electrical and optical properties. Scientists in the coating industry have since found ways to utilize graphene as an additive to improve the performance of various coating technologies. This material has become especially crucial in modern high performance and high demand industries, where coatings are required to consistently deliver superior performance in challenging and aggressive environments.

Graphene is an allotrope (another physical variant or form) of carbon. It is essentially a single layer of carbon atoms arranged in a hexagonal lattice. Think of a flat hexagonal net consisting of interlinked carbon atoms (Figure 1). Graphene’s two-dimensional, single-layer geometry makes it an indefinitely large molecule, as well as the thinnest material known to man, being only one atom thick. Stacked graphene layers held together by weak bonds form the molecular structure for graphite, one of the most common allotropes of carbon. 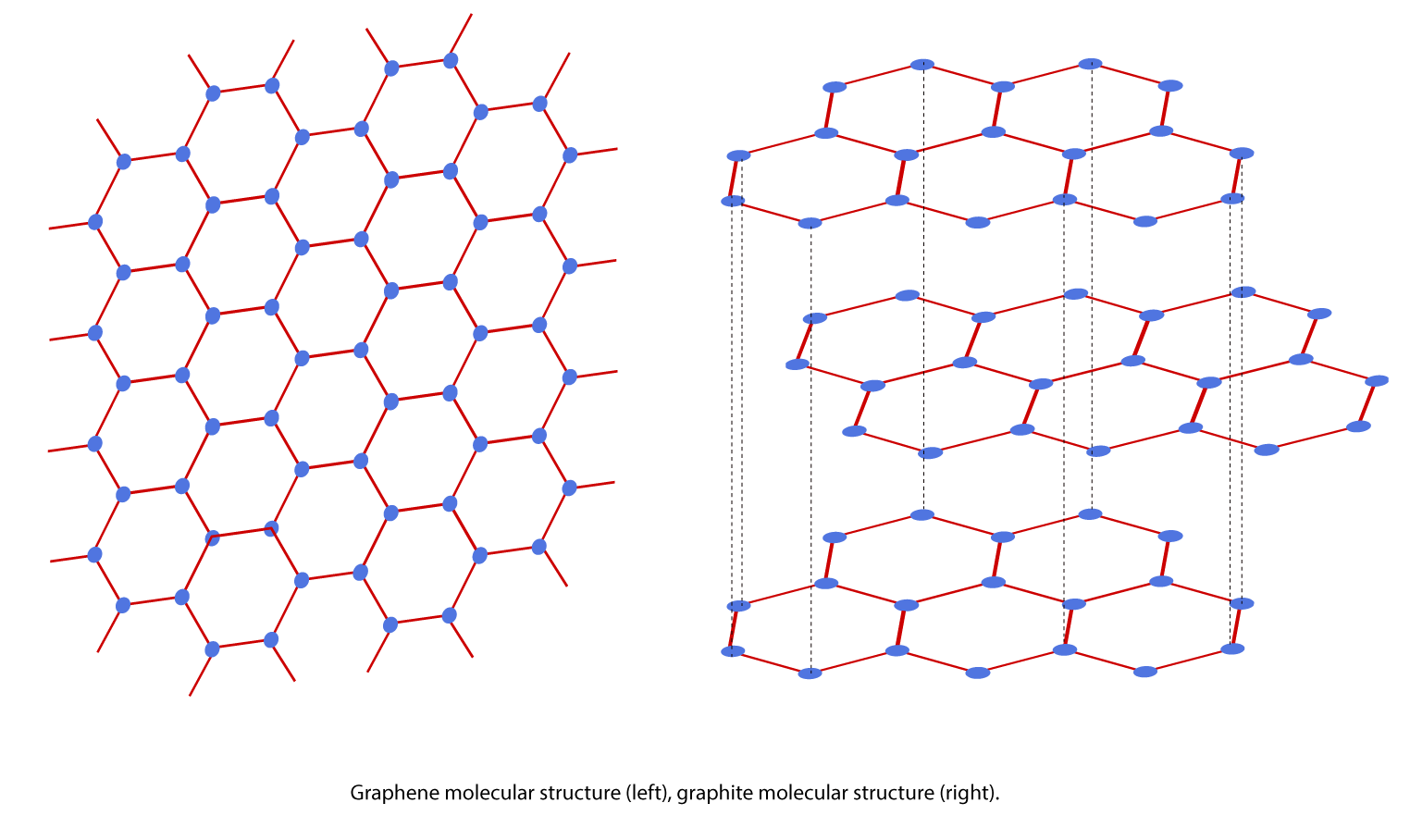 While scientists knew of the existence of this single atom thick, two-dimensional material, it had never been extracted under laboratory conditions. Then in 2004, two researchers, Professors Andre Geim and Kostya Novoselov, at the University of Manchester, developed techniques to successfully isolate a single graphene layer.

Graphene has many remarkable and unconventional properties. It is considered to be one of the strongest (over 200 times stronger than steel), thinnest, lightest and most thermally conductive and electrically conductive man-made material ever tested.

The two-dimensional structure of graphene nanoplatelets allows for the creation of materials with:

Historically, plate-like materials such as glass flakes and micas have served as reinforcement and provided barrier protection in various anti-corrosion coating formulations. These additives are distributed throughout the coating, providing a tortuous path through the resin binder for potentially corrosive ions to travel. (To learn more about the ingredients that make up a coating, read The Composition of a Paint Coating.)

How is graphene used in coatings?

One of the most effective ways to harness the power of graphene is to use it as an additive (i.e., combine it with other materials) to enhance the properties of existing products; in this case, paints and coatings.

Past coating formulations have traditionally employed inorganic filler material to modify the properties of polymeric coatings. Popular nanoscale paint additives, which consist primarily of layered clays, nanotubes and spherical silicon dioxide nanoparticles, are known to exhibit relatively poor compatibility when mixed with organic polymer resins; thus requiring the surface of the fillers to be further modified to improve the filler/matrix interaction.

Graphene's carbon-based composition and enhanced compatibility make it a viable filler for organic polymers. As such, extensive research has been conducted on graphene nanosheets, nanoplates and oxides as fillers for various types of coating formulations. (Related reading: The Advantages of Smart Coatings and Nanotechnology for Corrosion Prevention.)

One of the main uses of graphene coatings is corrosion protection. Graphene helps prevent corrosion via a defense mechanism known as barrier protection. During this physicochemical protective process, the graphene in the coating acts as an impervious layer, preventing air, moisture and salt (in some environments) from coming into contact with the underlying steel substrate; thus stemming the electrochemical reactions that initiate corrosion. This type of protection is attributed mainly to graphene’s hydrophobic (water-repellent) property.

While recent studies have focused primarily on the use of graphene and graphene composites as a means of corrosion protection, the scope of the research into graphene coatings and its application as an additive is extremely diverse and opens the possibility for a wide variety of enhancements and potential applications.

Studies show that when combined with compounds that offer galvanic protection, such as a zinc-rich primer, the barrier protection provided by the graphene complements the sacrificial zinc layer, resulting in superior coating formulations with the ability to deliver improved substrate product lifespan. Additionally, while standard anti-corrosion coatings need to be applied in relatively thick layers, graphene can provide sufficient barrier protection with a significantly smaller application thickness.

Graphene's superior strength and negligible weight lend themselves well for a variety of coating formulations in industries where durability, weight and water resistance are paramount. Such surfaces may include ship hulls, pressure vessels, pot/pan liners and glass surfaces. Substrates that require reliable protection from aggressive chemicals, fires, moisture, corrosion and UV degradation can also benefit from the properties of graphene coatings. Examples of sectors that may be exposed to these types of harsh environments include the aerospace, electrical, alternative energy and specialty chemical industries.

Some of the advantages of using graphene coating formulations include, but are not limited to:

The advent of graphene coatings and composites has already made its mark on numerous industries with its improved performance over conventional protective coatings and its extensive application possibilities.

The Pros of Smart Coatings and Nanotechnology

How to Get Started in a Career as a Materials Scientist