Flash rust occurs on metal within minutes to a few hours after cleaning is complete. The speed with which flash rusting occurs may be indicative of salt contamination on the surface and high humidity.

Flash rust refers to the very rapid onset of rust on a metal substrate. It can happen in a number of different instances, but what it means is that there isn't much time to guard against it. According to the SSPC Protective Coatings Glossary (PCG), flash rust is “rusting that occurs on metal within minutes to a few hours after cleaning is complete. The speed with which flash rusting occurs may be indicative of salt contamination on the surface, high humidity, or both.”

As wet cleaning methods have increased, so has the prevalence of flash rust - and the need to look at solutions or strategies to prevent it. Here are seven key things to know about this type of corrosion.

It Starts After Water Jetting or Blast Cleaning

Flash rust is rust that occurs with any type of wet abrasive blasting or surface preparation using water. (To learn more about this cleaning method, read Understanding the Industry Shift To Wet Abrasive Blasting.) Essentially, it's the rust that occurs as the surface dries or very shortly after that point - so within minutes to - at most - hours.

Flash rusting can occur anywhere a water-based solution is being used for surface preparation, but it often occurs as a result of water jetting, which is what we call “ultra-high pressure,” or applications using 10,000 to 40,000 PSI cleaning methods. That said, any type of surface prep that includes water could cause flash rust conditions. For example, I work with the U.S. Navy; when we’re doing non-skid surfaces on aircraft carrier decks or helicopter landing decks on ships they’ll use ultra-high-pressure water to remove the bulk of a coating. At that point, of course, the water is kind of hanging in pockets and it stays on that surface and that’s where you’ll start to see the flash rusting occur.

It Happens Within Hours

Flash rust is diagnosed visually. It has a nice, even, almost powdery residue that you'll be able to see on the surface of the substrate. It'll be a nice, even pattern. Because it occurs as a surface dries after wet abrasive blasting, it can happen very quickly. This is why prevention methods are so key. It's essential to have plan for preventing the oxidation process. 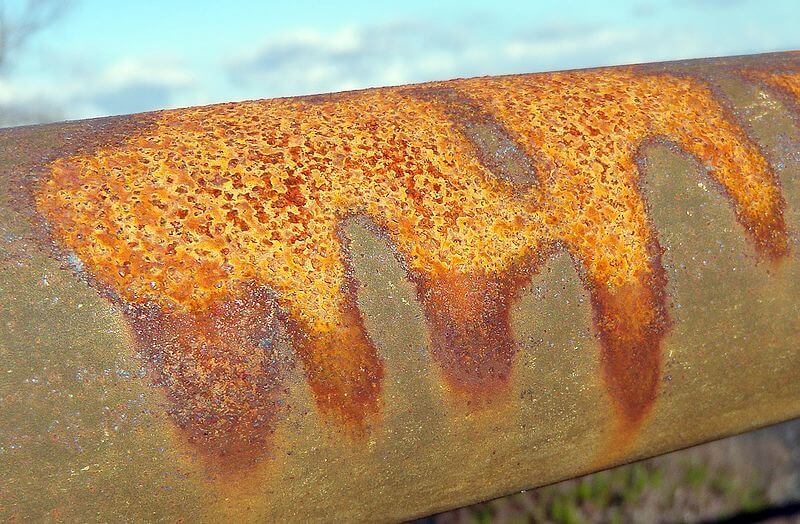 One of the big contributors to flash rust is water quality. I've seen a lot of companies down in the Southern U.S. where they're pulling water out of a well and, as a result, the water has a very high chloride content. Plus, a pumping system will actually squeeze a lot of the contaminates right out, just with water pressure. Using a very clean water source, such as water filtered using reverse osmosis, can help prevent flash rust - and even reduce the need for rust inhibitors and other protection methods.

Contamination of the Substrate Is a Factor

Salts and chlorides is a big issue with contamination of the surface, but in a lot of cases what you’ll find is that there were maybe some particles of rust when the steel was formed. Once they are exposed they can very quickly start to bleed rust. In many cases, that’s actually called rust-back, rather than flash rust. It's a variation of the same problem. We'll get into that a bit more in the next section.

There are Different Variations of the Problem

When it comes to flash rust, there are a couple of different variations. There’s re-rust, flash rust and, as mentioned above, rust-back. If we’re just dealing with the flash rust aspect of it, then that has more to do with rust that is going to occur on the surface uniformly in the course of minutes to a couple of hours.

Rust-back, on the other hand, occurs when there are already contaminates on the surface of a substrate. So, if you expose bare steel, even if you've done it as a dry spot, but you’ve got high humidity or moisture in the air, or you're near the coast and you’ve got a really corrosive atmosphere, that’s where you get your rust-back. That's typically something that you’re going to see when you’ve done dry abrasive blasting, or used power tools such as needle guns to clean the surface.

Re-rust, or rust bloom, refers to new rust. So it’s going to be pretty even over a large section of the surface. It’s similar to flash rust, but whereas flash rust will develop over minutes or hours, rust bloom can take days to develop.

Several different manufacturers make a corrosion inhibitors or surface passivators that can be mixed with water and used for wet abrasive blasting. This allows the water to get deep into the profiles with the vapor abrasive or wet abrasive technology and it will flush the salts and chlorides out of those deep grooves, leaving a much cleaner surface.

The key thing to understand about wet surface preparation as opposed to dry surface preparation is that a wet system will actually leave the surface much cleaner than a dry system even if we’re not using a rust inhibitor. This is because that water tends to hydraulic a lot of the salts and chlorides out of the surface. So, a wet surface preparation tends to leave a better surface for coating. We don’t have embedment with the wet and vapor abrasive systems like you do with a dry abrasive, so with the dry abrasive you might have a particular abrasive with a high salt content. At that point, you’re just starting to impregnate that substrate with further salt accumulation, so that’s going to increase the amount of rust that you start to get on the surface.

There are a few key ways to prevent flash rust. Some inhibitors on the market will evaporate and actually leave the surface very clean of any contaminates; others are designed to create a film to prevent the air from getting to the surface to begin the oxidation process. So, when it comes to water-vapor abrasives, you want to be able to use the right product for that. It may be a situation where if a customer doesn’t want to coat that substrate right away, and it may take up to a month before they get to it, you would want to use a material that would create a barrier on the surface so that they could go back and pressure-wash that barrier off and then provide the coating. That way, they can work for weeks or sometimes even months with some of these products without having to deal with any rust or flash rust issues.

In terms of products, there are options like CHLOR RID or HoldTight, which you mix directly in with the water source that you’re blasting with. (For more on this topic, see Best Practices for Cost-Effective Surface Salt Removal.) Those are by far the most common. The other way to prevent flash rust could be as simple as using reverse osmosis water, or a very clean water source. A very clean water source to begin with would be ideal. If you don’t have that, then you start to move into having to use rust inhibitors.