Failure to obtain the proper surface profile can lead to pinpoint rust or other coating failures such as adhesion failure.

A coating can only be as good as the preparation of the underlying substrate. For substrates in general, preparation involves cleaning and roughening to achieve an appropriate surface profile or anchor pattern that facilitates the chemical bond and mechanical adhesion between the coating and the substrate. In the case of concrete, the concrete surface profile (CSP) is used to describe the concrete’s outer surface texture.

Concrete may need to be prepared for repairs and overlays, or to clean and/or roughen the surface for the application of a subsequent protective coating. (For more on the importance of surface preparation, see Is Surface Preparation for Concrete Repairs a Fad?) In almost all cases this results in an increase of the true surface area where the bond mechanisms act (Figure 1).

Figure 1. Side view of the geometrical, true and effective surface areas of concrete and concrete with an overlay. Surface roughness (nooks and crannies) increase the true surface area.

Surface cleaning is intended to remove old coatings, dirt, grease, corrosion and other debris. Abrasive blasting, wet abrasive blasting, chemical washes and acid etching are some of the methods used.

The concrete surface may be roughened to achieve a specific surface profile or anchor pattern for aesthetics (e.g., to obtain a desired texture) or to prepare for the application of a protective coating. Up to a point, a rougher surface enhances the adherence (bond strength) of a repair material, a protective coating or an overlay. (There is some controversy over this point, see Myth or Fact: Higher Surface Profile Increases Coating Adhesion for an in-depth discussion.)

Again, abrasive blasting, wet abrasive blasting, chemicals washes and acid etching are some of the methods used, although more extreme tools such as scabblers and jackhammers can be used when significant amounts of concrete must be removed, albeit at the risk of creating microcracks.

Surface profiles are measured quantitatively in units of mils (thousandths of an inch) or microns (one millionth of a meter). To convert between the two measurement systems, remember that 1 mil = 25.4 microns. Qualitative methods are also available and suitable in many circumstances.

Replica tape is a low-cost tape with a layer of crushable foam that is temporarily adhered to a material’s surface to record an exact impression (actually, a reverse copy). When the tape is compressed onto the surface, a mirror image of the peaks and valleys on the concrete’s surface is formed on the tape. (Learn more in Replica Tape: A Source of New Surface Profile Information.)

The principle behind replica putty is similar to replica tape, except that the media consists of two putty compounds that are mixed together and then applied to the concrete’s surface. After the putty cures and hardens in five to ten minutes, it can be visually compared with International Concrete Repair Institute (ICRI) Concrete Surface Profile Coupons according to ASTM D 7682- 10, Method A, or measured with a micrometer per ASTM D 7682 Test Method B.

ASTM E965, “Standard Test Method for Measuring Pavement Macrotexture Depth Using a Volumetric Technique” describes this test, which involves spreading a known volume of sand on the surface and then measuring the area covered by the sand. This test provides the average depth of the concrete’s macrotexture. Similar tests use other media, such as glass spheres.

Although subjective, one of the best and most practical ways to assess concrete surface profiles is to use rubber comparator chips, such as those available from ICRI. Analogous to paint color samples or color value guides, this set of molded rubber samples (Figure 2) range from CSP 1 (smoothest) to CSP 10 (roughest), allowing you to make a visual and tactile comparison with the surface in question.

ICRI also provides a guide as to what dry film thickness of a coating or overlay is sufficient for each CSP grade, and which surface preparation methods can be used to achieve a desired concrete surface profile.

For the test, a disc of 50 mm or 75 mm (2 or 3 inches) is bonded to the concrete test surface (or an overlay). The area around the disc is scored so that the disc is only in contact with the concrete under it. The disc is then pulled directly upwards; the force required is the pull-off force. 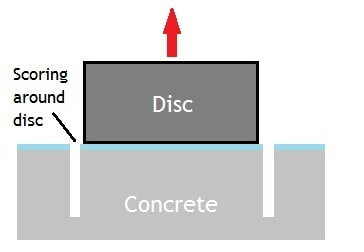 Figure 3. Disc bonded to coating on a concrete test sample.

If, during testing, the coating is removed before the concrete fails, then the bond between the coating and the concrete is the weakest link, indicating that the surface profile may not have been optimal.

Failure to obtain the proper surface profile can lead to pinpoint rust or other coating failures such as adhesion failure. (Learn more in 5 Coating Defects That Can Be Avoided By Adhering To Coating Specs.) Fortunately, there are a variety of methods you can use to accurately measure concrete’s surface profile, increasing the likelihood of success when applying an overlay or coating.