In many industrial processes, the ability to regulate the temperature in process vessels, tanks and other equipment is a valuable asset. The petrochemical, food production, pharmaceutical and specialty chemical sectors are just some of the industries that depend on temperature regulation. Uncontrolled and unwanted loss of energy generally translates to process and cost inefficiencies. For example, in the oil and gas industry the evaporation of crude oil can lead to a loss of hydrocarbon product and environmental pollution due to the release of volatile organic compounds (VOCs).

To resolve these issues, industrial plants have traditionally used thermal insulation to help maintain the desired temperature within a storage or transportation vessel. However, while conventional insulation is relatively efficient at temperature control, it is also known to promote a severe type of corrosion known as corrosion under insulation (CUI). (Learn more about CUI in the article Corrosion Under Insulation: The Challenge and Need for Insulation.)

The Corrosion Under Insulation (CUI) Problem

CUI is one of the most pervasive threats in numerous industries worldwide. A study conducted by the National Insulation Association reveals that 10% to 30% of a facility’s insulation integrity is compromised at any given time. CUI, if left unmanaged, usually leads to several plant issues including unscheduled shutdowns followed by costly maintenance and repair operations. It is estimated that the majority of a plant’s maintenance cost is directed towards CUI-related issues. In 2002 a reputable chemical processing company spent over $US 5 million replacing stainless steel equipment due to chloride stress corrosion cracking (CSCC) induced by CUI.

Storage tank insulation constructed from traditional materials, such as organic foams, mineral wool, calcium silicate, ceramic fiber, etc., tends to create environments that are ideal for the formation of CUI.

Corrosion under insulation, as its name suggests, is an aggressive type of corrosion that forms in steel that is placed under insulation material. CUI occurs when moisture (usually in the form of rainwater) is absorbed by the insulation and is allowed to seep inward to the level of the steel substrate. The insulation then provides an annular space where water and oxygen are retained, facilitating corrosive reactions between the air, moisture and steel. In addition to the underlying steel, CUI can also attack the tank jacket, insulation hardware and neighboring piping equipment. 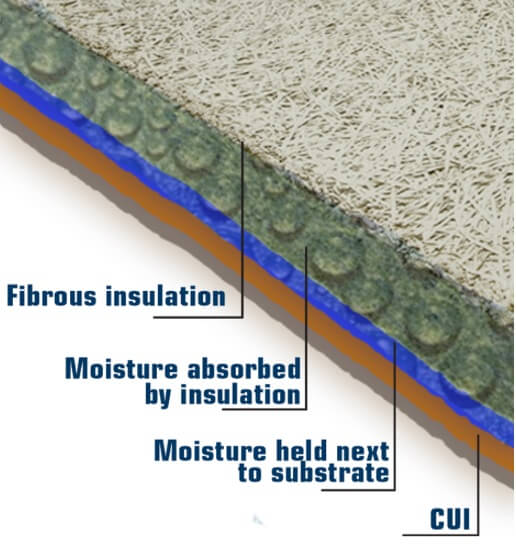 It is generally accepted that insulated carbon steel hardware operating in the temperature range of 25°F (-4°C) to about 350°F (177°C) is most vulnerable to CUI. At temperatures lower than 25°F there is not enough energy to facilitate the corrosion reactions, and at temperatures higher than 350°F corrosion is suppressed because the moisture evaporates before it can reach the steel substrate.

Making matters worse, when conventional insulation absorbs moisture, its insulating properties are significantly reduced. Research shows that at 20% moisture absorption, fibrous insulation can lose more than half of its design thermal resistance (R-value). As such, the performance of conventional insulation diminishes over time, leading to higher energy costs and compromised process stability. (This is discussed in more detail in The Detrimental Effects of Wet Insulation in the CUI Range.) 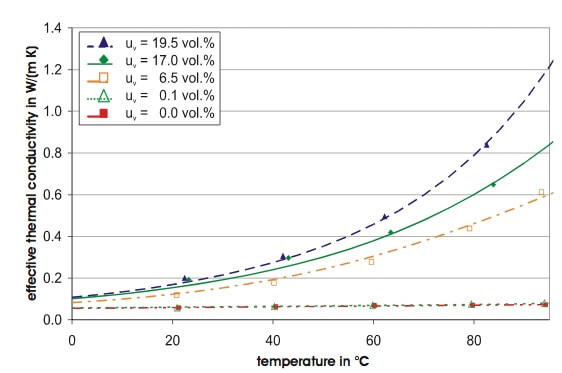 Figure 2. Measured thermal conductivity of mineral wool as a function of the temperature for different moisture contents (uv).

Repairing the deterioration caused by CUI can be a costly undertaking. The damaged portion of insulation and the affected area of the steel substrate must be removed, disposed of, and replaced or repaired. In addition, some repair programs may also require the steel substrate to be covered with a protective coating. In large storage tanks, this can be a costly undertaking because scaffolding and other structures may need to be erected to access certain areas.

However, regardless of the quality of the repair, conventional insulation remains susceptible to CUI; thus recurrence of substrate corrosion remains a likely possibility. As such, frequent and time-consuming remediation is required, leading to increased operating costs, recurrent shutdowns and decreased productivity.

Thermal insulating coatings (TICs) are essentially spray-applied coatings that provide thermal insulating qualities in a thin coating form. While not as effective as brand-new conventional insulation, studies show that they can have the same insulating value as aged/saturated fibrous insulation without the threat of CUI. These coatings, which have been in use since the early 1990s, bridge the gap between coating and insulation. This type of thermal insulation is applied directly to the substrate or primer using airless spray equipment that many industrial contractors already own.

TICs work mainly on the principles of reflectivity, emissivity, conduction and absorptance. When heat is directed toward the coating, it is reflected in the direction in which it originated. Also, the relatively low emissivity property of the coating results in a low heat flux. These combined factors allow for efficient insulation across the surface of the coating while preventing heat absorption from other external sources.

TICs prevent CUI by eliminating moisture absorption. Because there is no interior environment for air and moisture to collect (as is the case with wool and insulation constructed from of other fibrous material), an atmosphere that is conducive to corrosion cannot develop. Also, in contrast to conventional thermal insulation that can be several inches thick, TICs can be applied in coats as thin as 20 mils (0.5 mm) built up to thicknesses of 200 mils (5 mm) depending on application temperatures and desired results.

TICs are quickly gaining widespread acceptance due to their performance and rigorous testing criteria. The National Association of Corrosion Engineers (NACE) is constantly researching TICs and their applications due to their real-world successes in various industrial facilities. TICs have been further validated by NACE through the development of several standards and specifications regarding their use.

Because TICs do not consist of fibrous material and are unable to absorb moisture, wicking, or the spreading of moisture to other areas of the substrate surface, is eliminated. As such, even if the coating is damaged, corrosion remains limited to the point of impact. Storage tanks and vessels coated in TICs can be easily spot repaired with a sprayer or brush because moisture is not allowed to propagate past the point of impact.

Another major benefit of TICs is their ease of application. Insulating coatings can be applied hot without the need for process shutdown, which means they can be sprayed onto the surface of the tank or vessel with minimal disruption to daily activities. The minimal equipment (man-lift instead of scaffolding, spray-rig, minimal PPE) and minimal man hours (most crews consist of 4-8 people) needed for application allows for relatively quick and low-cost installation. 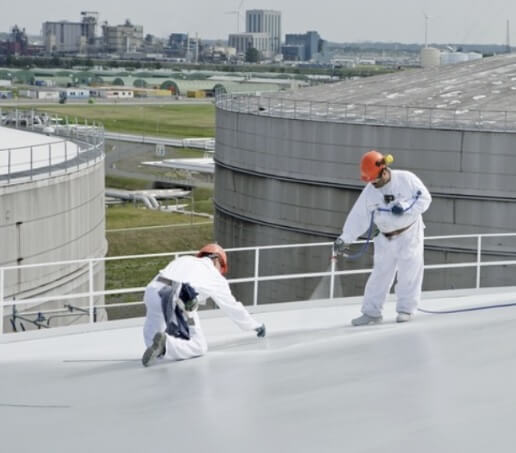 Additionally, thermal coatings act as a seamless membrane because there are no joints, seams or gaps, even when applying the coating on complex geometry. Because of the coatings’ spray-applied nature, pipes, boilers and various other equipment surfaces can be coated for a thin, aesthetically pleasing and seamless surface finish.

Due to their ability to prevent CUI, TICs can offer longer equipment lifespans with reduced maintenance cycles. TICs have a constant thermal efficiency over the life of the coating (typically 20+ years) and are highly resistant to thermal expansion and contraction. By contrast, the performance of conventional insulation can decrease over time while becoming increasingly susceptible to recurring CUI and maintenance.

TICs are also essential for protecting plant personnel. Maintenance crews and other staff often traverse around hot process equipment. By utilizing TICs, personnel can work comfortably near hot units, thus significantly reducing their risk of injury. A coating layer as little as 1 mm can prevent burns when touching a 135°C (275°F) surface, with thicker coating layers providing superior protection at higher temperatures. The NACE TM21423-2017 Standard governs the performance of TICs in this regard and states that personnel must be protected from burns in accordance with ASTM 1055/1057 and ISO 13732-1. (Learn more in Use of Insulating Coatings for Hazard Protection.)

Other benefits of insulating coatings include:

Thermal insulating coatings like Mascoat Industrial-DTI Thermal Insulation are effective at preventing corrosion under insulation. Their lack of fibrous materials and a much lower thickness eliminates the internal environment that otherwise allows moisture and oxygen to accumulate. In addition to preventing corrosion, TICs also possess numerous other benefits that make them a valuable asset for almost any industrial processing or storage unit.

How Thermal Insulating Coatings Can Be Used to Prevent Flood Damage