Hardness is not defined by any one universal scale or unit of measure. Several tests are available to assess this property, with each having its own unique set of advantages and disadvantages.

The hardness of materials is defined as the resistance of a specific material to localized plastic deformation or indentation. The term may also be used to describe the resistance of the material to scratching, abrasion or cutting. With respect to metals, hardness is most commonly used to assess its ability to resist permanent deformation due to concentrated applied loads. The greater the hardness of the metal, the greater its ability to retain its shape in the presence of external forces.

The hardness of metals is largely dependent on other parameters such as stiffness, strength, strain, ductility and yield strength. Knowing the hardness of a metal is extremely useful as it assists in the selection of appropriate materials for specific applications. Prior knowledge of the degree of hardness of a metal helps to assess how easily the metal can be machined or how it will behave in operation. (For more on how proper material selection can prevent corrosion, read How to Control Corrosion by Improving Design.)

Unlike other well-defined material properties, there is no standard scale for measuring hardness. Materials are tested using various methods, with each test expressing hardness using its own arbitrarily defined scale. In this article we shall explore five of the most common test methods for measuring the hardness of a material, how they differ and in which situations they are most suitable.

The Brinell hardness test entails measuring the diameter of indentation caused by a constant concentrated force applied by a steel or carbide spherical indenter on a test specimen. The steel ball indenter is first placed in contact with the material before a constant force is applied and maintained for a 10 to 15 second duration, known as the dwell time. After the dwell time is completed, the spherical indenter is removed, leaving a round-shaped indent on the sample.

The Brinell hardness is calculated using the following formula:

This hardness test method makes the widest and deepest indentation of the 5 test methods mentioned in this article, allowing the test to be conducted over a larger surface area of the specimen. This provides test averages of hardness over a wider surface area of material, which has the advantage of taking into account surface and grain irregularities on the metal. However, the Brinell hardness test is slower than other test methods and leaves a large permanent impression on the test specimen.

The Rockwell hardness test evaluates the hardness of a material by measuring the permanent depth of indentation due to an applied concentrated load. The higher the number on the Rockwell hardness scale, the harder the material. The test is conducted by applying a minor force of 10 Kg using a diamond cone or a steel ball indenter on the surface of the material. The depth of indentation from this preliminary load is recorded and used as a reference point. 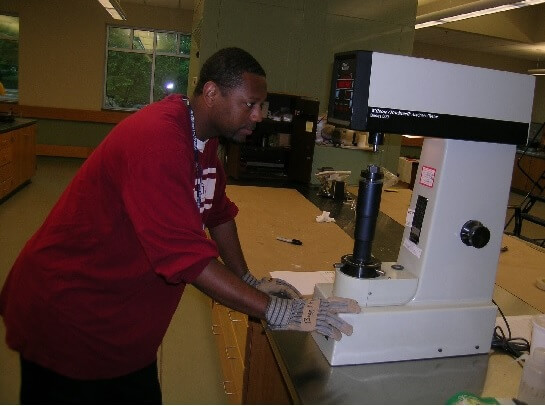 The Rockwell hardness is calculated using the following formula:

The Rockwell hardness test was developed to be less destructive and cheaper than the Brinell test. Measuring hardness using differential depths helps to eliminate errors due to surface imperfections. In addition, the hardness value can be read with no additional optical equipment, making it one of the most common hardness testing methods.

The Vickers hardness test involves the use a 4-sided square-based pyramid indenter, with a precisely defined constant force on the test specimen to evaluate the surface area of the indentation. The specimen is first lifted until it comes into contact with the indenter. The test force is then applied by the indenter to the test specimen, slowly increasing until it reaches its specified value. This force is then held for the appropriate dwell time and the surface area of the diamond or square shaped indentation is calculated.

The Vickers hardness of the material is then found using the following formula:

The Vickers and Knoop tests are described in ASTM E92 – 17 (Standard Test Methods for Vickers Hardness and Knoop Hardness of Metallic Materials).

Figure 2. Video of an operator performing a Vickers hardness test.

The Knoop hardness test is very similar to the Vickers hardness test in that a diamond/pyramid shaped indenter is applied to the test material for a specific dwell time. However, the Knoop indenter is an elongated diamond, thus allowing it to test brittle materials and thin layers without cracking.

The Knoop indenter has a major diagonal that is approximately three times longer than the Vickers diagonal and penetrates the material at about half the depth of the Vickers test, making it better suited for testing brittle materials such as ceramics.

The Knoop hardness test creates a rhombohedral indentation, with one diagonal being seven times longer than the other.

The Knoop hardness is calculated by the following formula:

The Mohs hardness test, unlike the previously mentioned tests, doesn't involve the application of a force via an indenter. This test measures the relative hardness of a material by defining how well it resists scratching by other substances. Developed by German geologist and mineralogist, Friedrich Mohs, the hardness of a material is determined by observing whether its surface can be scratched by another material of known hardness.

Numerical values are assigned to this property by ranking minerals along a hardness scale (the Mohs scale) that is comprised of 10 minerals. The higher the number on the scale, the harder the mineral is. For example, if a substance of unknown hardness is scratched by orthoclase but not apatite, then its Mohs hardness is between 5 and 6.

Increments of hardness on the Mohs hardness scale are very arbitrary and not linear or proportional. It is for this reason that this test is mostly used to determine only the relative hardness of minerals and not used on other materials such as metals. 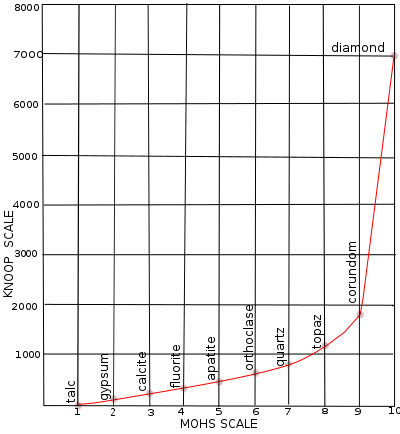 There's no universal measurement, scale or unit for defining the hardness of materials. Several tests exist (some described here and others included in the article 3 Essential Types of Material Destructive Tests), each defining hardness with their own unique arbitrary scale. Knowing the advantages and disadvantages of each test is key to determining which method is the most appropriate for the material to be tested.

How and Why a Material Fractures