The disadvantages of many two-package epoxy coatings are eliminated by new single-package coatings that perform comparable to that of standard two-component epoxy coatings even for challenging applications such as the decks and superstructures of ocean-going ships.

Epoxy coatings are commonly used in the protective and marine coatings markets because of their versatility and excellent corrosion resistance properties. Unfortunately, separate packaging for the epoxy resins and the amide or amine hardeners is required; otherwise the two components will chemically react and result in a negligible short pot life if mixed prematurely. The single-pack epoxy coatings that do exist are not as strong or are impractical for most protective and marine coating applications because they require a bake cure.

Introduction and History of Epoxy Coatings

Until around the 1950’s, the vast majority of single-package coatings used for substrate protection provided excellent water, chemical and corrosion resistance, but they had a very high solvent content, which required several coats to obtain the target dry film thicknesses (DFT), and contained a large proportion of hazardous volatile organic compounds (VOCs). Due to regulations introduced in the mid-1970s in the United States, these coatings fell out of favor and were replaced by two-package epoxy coatings.

The two-package epoxy coatings have some disadvantages. The ingredients must be kept separate until immediately before the coating application begins. And although the ingredients are premeasured for complete use, attempting to mix only a fraction for a small job is problematic without accurate measuring or weighing equipment in the field, with the attendant opportunity for wastage and loss. Finally, it has been difficult to produce one-package low VOC epoxy coatings because they are susceptible to water entering the manufacturing process and thus shortening the shelf life of the coating.

These disadvantages are eliminated by a new single-package coating that performs comparable to that of standard two-component epoxy coatings even for challenging applications such as the decks and superstructures of ocean-going ships. This new technology, which is the subject of this article, has resolved the problem of limited stability and inordinately short shelf life.

Sets of cold-rolled steel panels of various sizes were used to evaluate corrosion resistance. The test panels were abrasively blasted to achieve a desired surface profile. Q-Fog cabinets were used for the laboratory testing.

After 1000-hour, 2000-hour and 3000-hour exposure intervals per ASTM B117, the test panels were removed and examined for rusting and blistering. Scribe creep measurements were then taken after using a paint stripper to remove the coating. Results are shown in Table 2. All ratings and scribe creep values reported below are the average of the three test panels in each set.

The results and photos of the salt fog exposure panels before (Figure 1) and after stripping (Figure 2) the scribe area indicates that the corrosion resistance of the single-pack epoxy was similar to the two epoxy-polyamide coating control, with no observable field rusting or blistering. The scribe creep was also comparable to that of the controls. 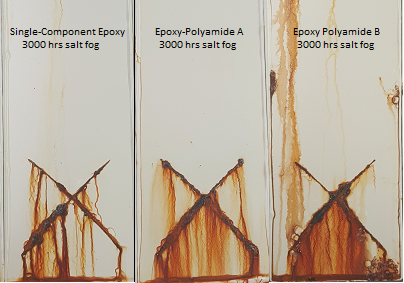 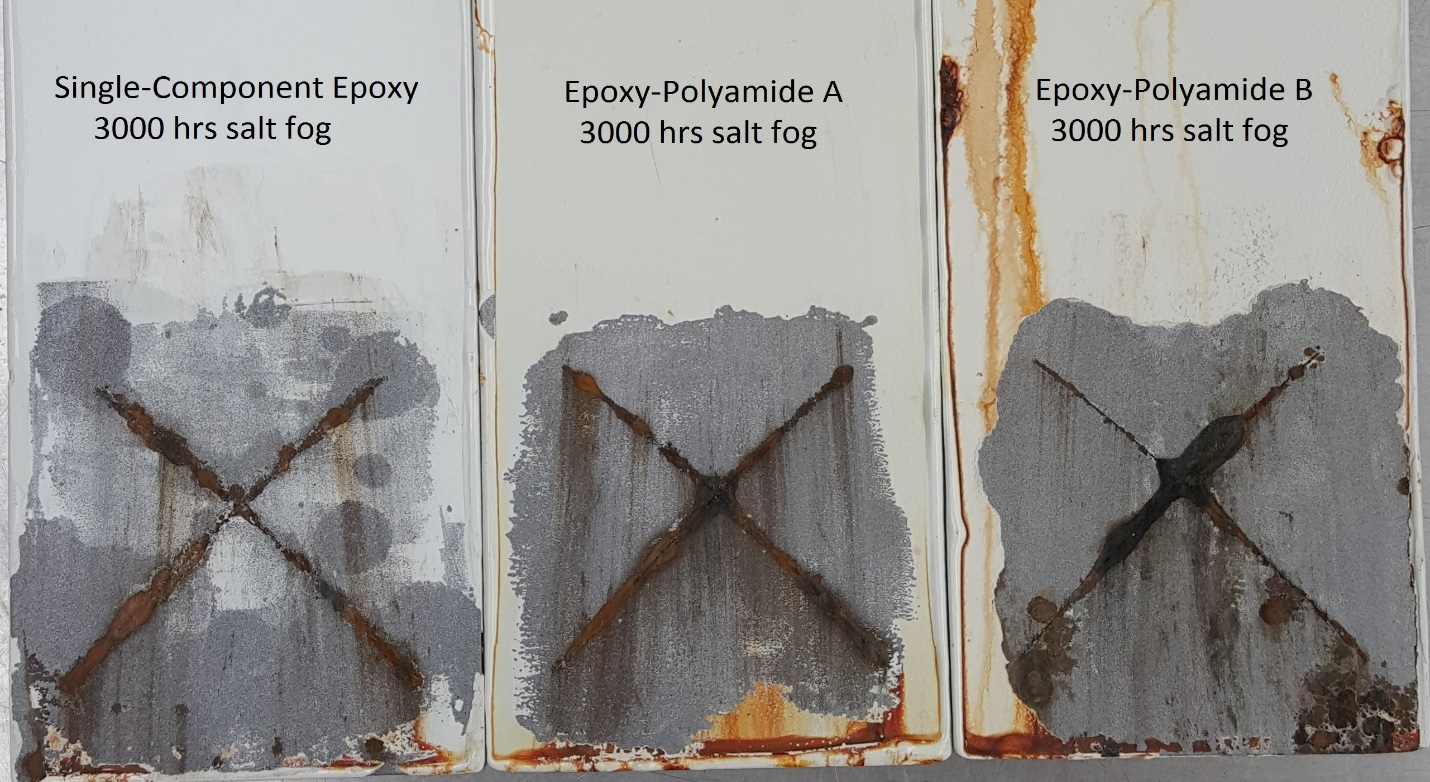 As with the salt fog testing, for each product under evaluation, three sets, each comprised of three panels, were exposed to Cyclic Salt Fog/UV Exposure per ASTM D5894. Results for the 1500-hour (roughly 4.5 cycles) and 3000-hour (roughly 9 cycles) exposure intervals are shown in Table 3.

Again, the results indicate that the corrosion resistance of the single-pack epoxy was similar to the two epoxy-polyamide coating control, with no observable field rusting or blistering. The scribe creep was also comparable to that of the controls. Photos of the cyclic Prohesion exposure panels before (Figure 3) and after stripping (Figure 4) the scribe area are shown below. 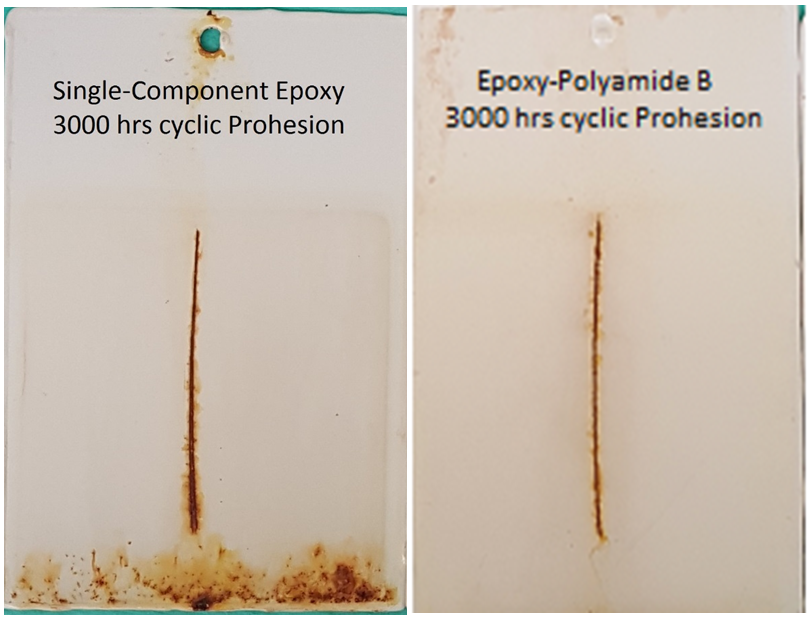 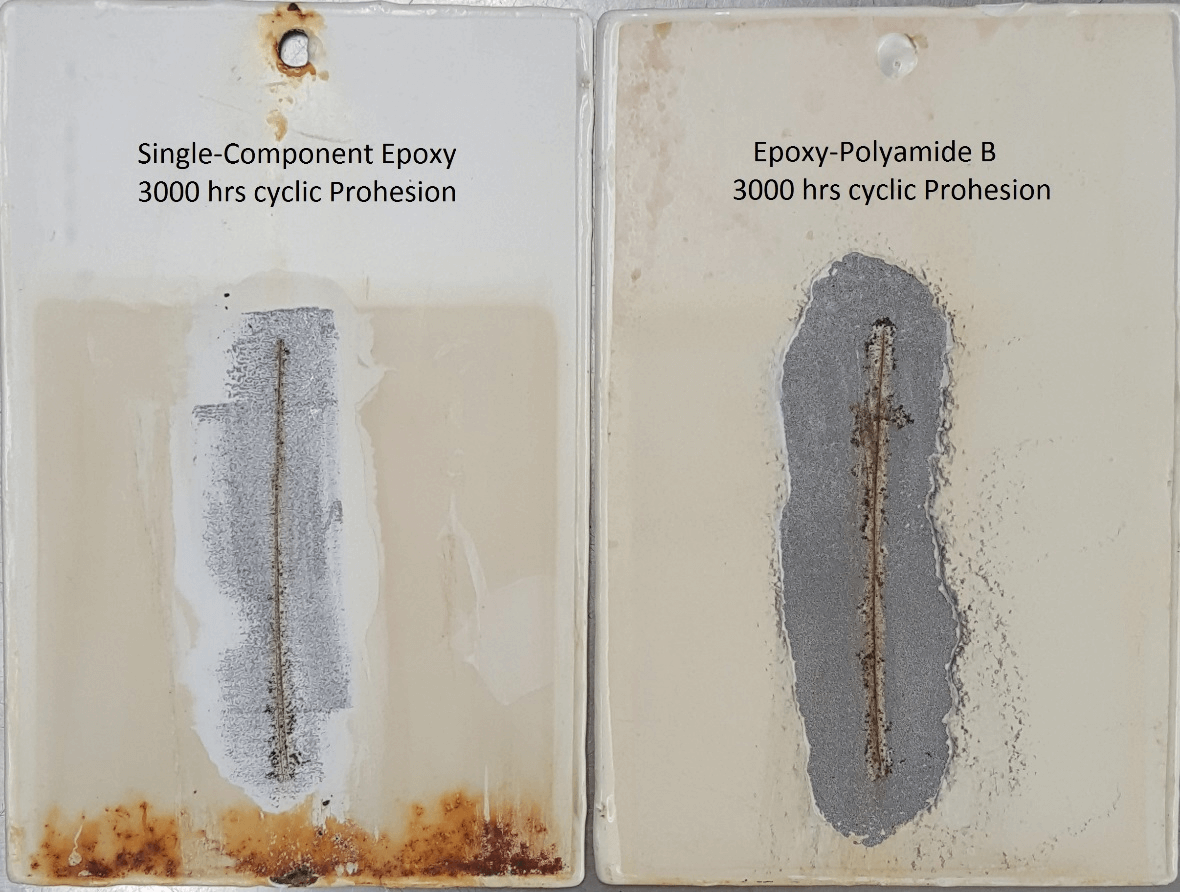 The Physical Properties of Coatings

A damaged coating surface is an ingress point for water, oxygen and corrosive chemicals. Therefore, the three coatings were evaluated to ascertain their physical properties of abrasion resistance, film hardness development, impact resistance, adhesion and stability, all of which contribute to the coating’s ability to resist corrosion and extend its service life.

The abrasion resistance of the single-pack epoxy is comparable, falling between the results from the two-pack epoxy polyamide coatings.

Impact resistance. As previously mentioned, a damaged coating is a pathway to the initiation of corrosion. The places where protective and marine coatings tend to be used often contain many opportunities for accidental damage, so the ability to resist impacts contributes to the coating's overall effectiveness. As seen in Table 6 below, the impact resistance of the single-pack epoxy coating is comparable to the control products.

Adhesion. The performance properties of the single-component epoxy were compared to the two commercial epoxy-polyamide controls per ASTM D4541 Pull-Off Strength of Coatings Using Portable Adhesion Testers. Similar results were observed for all three products (Table 7).

Stability. To test the stability of the new single-component epoxy coating, samples were placed in an oven to accelerate the effects of aging at room temperature. The results are shown below (Table 8).

Although some viscosity increase over time was observed when the samples were exposed to elevated temperatures, the viscosity of the new single-pack epoxy exhibited stability in excess of one year, which is deemed to be a sufficient shelf life for coatings of this type.

Some other properties of the new single-pack epoxy and the two-component epoxy coatings are shown below (Table 9).

The following conclusions should be considered by those involved in specifying, selecting or applying protective and marine coatings:

Specifying the Gold Standard for Color and Protection