Many reinforced concrete structures suffer from corrosion damage. Causes include salt ingress due to the application of de-icing salts during winter maintenance, exposure to marine environments and carbonation of the concrete.

Corrosion is an electrochemical process and as such the use of electrochemical technology treatments has been very popular. Traditional treatments such as impressed current cathodic protection (ICCP) require the passage of a constant current through the concrete to arrest corrosion activity and hinder its future development. However, for prestressed concrete reinforcement there are risks of hydrogen embrittlement of the steel if the applied polarization is not strictly controlled. (Learn more in An Introduction to Hydrogen Embrittlement.)

The Need for Hybrid Corrosion Protection

Standards deal with such risks by limiting the induced change in the potential of the steel reinforcement by reducing the amount of hydrogen generated as a result of water hydrolysis during the application of an electrochemical treatment such as ICCP. However the risk to the asset owner remains throughout the long-term use of an ICCP system as monitoring and adjustments are usually undertaken at annual intervals only and this may not be sufficient. An alternative approach to reduce this risk would be to apply a brief impressed current treatment delivered using an external DC power supply to re-alkalize the corrosion sites and provide long-term corrosion prevention by means of galvanic corrosion protection. This combination of electrochemical treatments is more commonly known as hybrid corrosion protection.

The Kyle of Tongue Bridge in Sutherland, Northern Scotland (see main image, above), opened in 1970, has an overall span of 184 meters consisting of 18 approximately equal spans and carries a single lane dual carriageway. Prestressed concrete beams form the deck, with reinforced concrete pilecaps supported on steel piles. The bridge was patch repaired in 1989 due to chloride induced corrosion. However, inspections from 1999 onward reported on-going corrosion and structural deterioration (Figure 1). 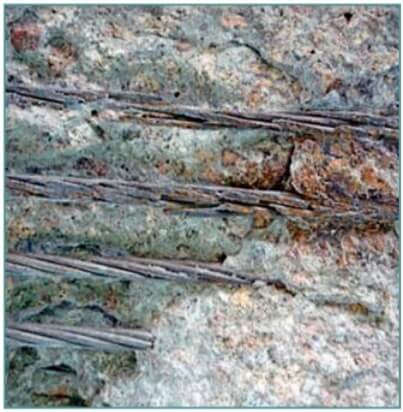 A refurbishment contract was let in 2011 to extend the service life of the structure for a 30-year period by providing corrosion arrest and prevention.

The Tiwai Point Bridge in Invercargill, Southland, New Zealand, opened in 1969, has an overall span of 486 meters consisting of 27 approximately equal spans and carries a single lane dual carriageway. It is comprised of prestressed and post-tensioned concrete beams forming the deck, with reinforced concrete pilecaps supported on prestressed concrete piles. The superstructure was replaced in 2009-2010 due to severe corrosion to the reinforcement. A repair contract was let in 2013 to extend the service life of the substructure for a 50-year period by providing corrosion arrest and prevention.

Hybrid corrosion protection was implemented on both structures. For the Kyle of Tongue bridge, it was used to arrest existing corrosion activity to the prestressed concrete beams of the superstructure and extend their service life for an additional 30 years. For the Tiwai Point Bridge, it was used to provide corrosion prevention to the prestressed concrete piles within the tidal zone with a service life of 50 years.

Only physically deteriorated concrete was required to be removed from the prestressed concrete elements. Hybrid anodes 18 mm in diameter and typically 37 mm long were installed in pre-drilled cavities at approximately 300 mm centers, in-between the prestressed tendons. The pre-drilled cavities were filled with proprietary low strength putty to fully cover the anodes and provide separation from the repair concrete (Figure 2). 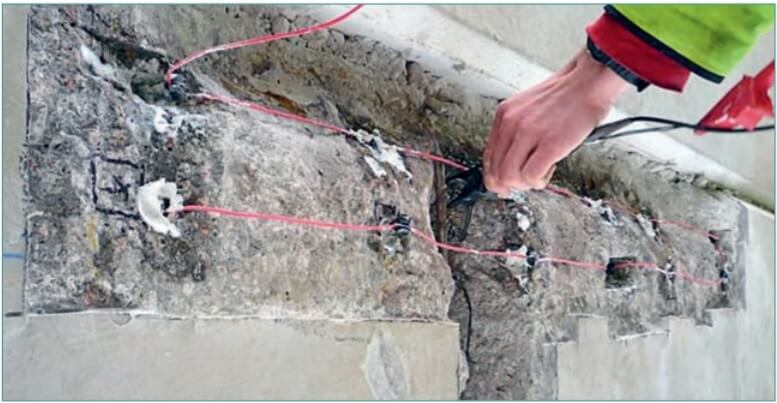 Evaluating the Effectiveness of Hybrid Corrosion Protection Systems for Concrete

The hybrid corrosion protection systems installed on the two structures were designed to provide an initial charge sufficient to arrest corrosion and to provide adequate current to maintain passivity for the remainder of the service life. However, it has also been designed to enable an additional impressed current charge later during service life should monitoring data so determine that this is necessary. On this basis, the following criteria were set for assessing its performance:

Corrosion current densities can be calculated based on an applied current to the steel and the resultant steel potential shift. These can be subsequently inserted into the Butler–Volmer equation, which provides the basis for polarization resistance theory, to calculate the corrosion current density (Figure 3). 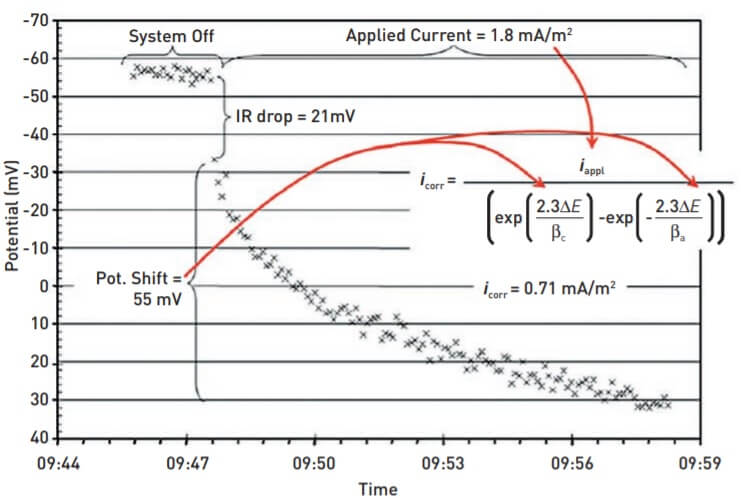 Overall, hybrid corrosion protection is an attractive alternative to traditional corrosion protection treatments as it combines the power to arrest the corrosion activity with the simplicity and low maintenance requirements of galvanic technologies. It offers a temporary energizing phase to arrest corrosion followed by a permanent galvanic mode phase that is particularly beneficial for prestressed concrete structures as it reduces significantly any hydrogen embrittlement risk. (This method is also discussed in the article How Hybrid Cathodic Protection Systems Are Being Used to Protect Reinforced Concrete.)

Following a brief impressed current treatment delivered using an external DC power supply to arrest corrosion, low density galvanic corrosion protection has been sufficient to maintain the corrosion rates below the required threshold. Monitoring of the steel potentials over a period of up to 600 days has also confirmed that the steel is passive. It has also been observed that over time steel potentials have been moving towards more positive values, which is another indication of overall steel passivity. Most importantly, passivity has been maintained despite the continuous exposure to an aggressive marine environment.

Video: When to Use Impressed Current Cathodic Protection