The presence of various chemical compounds leads to excessive corrosion problems in crude oil pipelines and downstream distillates equipment. Therefore, it is imperative to reduce the concentration of these impurities.

The refining of crude oil into usable products is a complex process with many opportunities for corrosion to gain a foothold. Understanding the typical atmospheric distillation process flow in a crude oil refinery is a valuable tool to help identify corrosion and implement controls in those locations where corrosion is likely to occur.

Upstream, Midstream and Downstream Sectors of the Oil and Gas Industry

An Overview of Crude Oil Refining 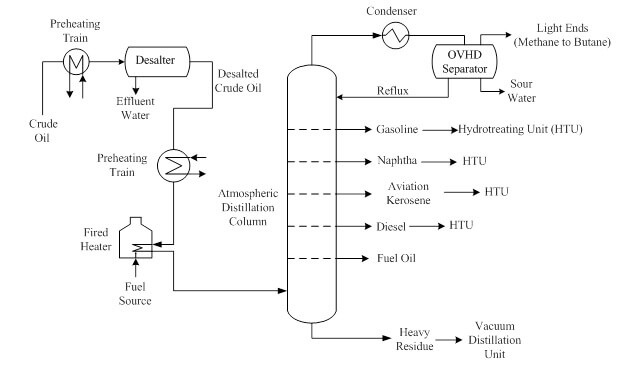 Crude oil on its own is not corrosive, but the reservoir source and method of production may contain any of several impurities, such as water, salts, sulfur compounds, oxygen compounds and carbon dioxide (CO2). (Learn more in The 6 Corrosive Components That Can Be Found in Crude Oil.)

The most common salts seen in crude oils are sodium chloride (NaCl), calcium chloride (CaCl2) and magnesium chloride (MgCl2). However, the salt concentration of crude oils depends heavily on the type and source of crude oil. Additionally, crude oil contains some free water which is usually removed by a surface separator.

The presence of these salts and water in the crude oil leads to the formation of hydrochloric acid known as salts hydrolysis according to Eqs. (1) to (4).

The salts hydrolysis usually occurs at 120°C and 210°C (248°F and 410°F) for MgCl2 and CaCl2 respectively and is more prevalent in regions of high temperature (from the preheating exchanger to the distillation column).

Additionally, during the cooling down of the distillation column light ends, the hydrogen chloride gas mixes with the steam condensate to form hydrochloric acid. This acid accelerates both general corrosion and pitting corrosion. Corrosion related to hydrochloric acid is difficult to control because the chlorine atom (with a very small size) easily penetrates the protective layers of surface metals.

Therefore, the acidity of the condensed water vapor (water condensate) in the overhead separator should be monitored regularly to determine if neutralization is required as well as to change the rate of alkaline injection. When this is established, organic neutralizers are injected at the vapor line (top exit) of the atmospheric distillation column to reduce the concentration of protons (H+). The most frequently used neutralizers, which are alkaline in nature, are ammonia (NH3) and filming amines (RNH2), and they react with hydrogen chloride to form ammonium chloride (NH4Cl) and amine hydrochloride (RNH3Cl) salts according to Eqs. (5) and (6).

The rate of neutralizer injection should be performed with precision to avoid a pH swing. This is because the pH stability is important towards maintaining a corrosion free environment. The amine hydrochloride salts should not be allowed to accumulate for a long time at the bottom of the overhead separator because it can trigger corrosion.

Crude oil and distilled fractions contain certain amounts of sulfur compounds and they are mostly bonded with carbon atoms, while the remaining are in the form of hydrogen sulfide (H2S) and elemental sulfur. During atmospheric distillation, H2S exits with the light ends and water vapor from the top of the distillation column. This not only attacks the internals of the distillation column but corrodes the downstream piping that conveys the light ends to the condenser and overhead separator. The corrosion also extends to light ends downstream processing equipment. Additionally, some of the H2S and other sulfur compounds also exit with liquid fractions such as gasoline, naphtha, aviation kerosene and diesel, causing severe corrosion problems.

In order to minimize corrosion issues at the top section of the distillation column and in downstream equipment, NH3 and/or filming amine is injected at the top exit (vapor line) of the distillation column. The reaction between NH3 and H2S leads to the formation of ammonium bisulfide, while the H2S and filming amine reaction forms amine bisulfate (See eqs. (7) and (8)). The bisulfate and bisulfide is withdrawn with the wastewater sent to the sour water treatment section.

It is important to note that the ammonium bisulfide and amine bisulfate also introduce corrosion problems in the sour water treatment units. However, these sulfides and sulfates are less corrosive than H2S and their corrosion rates are greatly influenced by the fluid velocity.

As for the liquid fractions (gasoline, naphtha, aviation kerosene, diesel) containing H2S and other sulfur compounds, they are usually purified through a hydrodesulfurization process. The other sulfur compounds include but are not limited to mercaptan (RSH), sulfide (RSR), disulfide (RSSR), and thiophene (C4H4S), where ‘R’ in the chemical formula is a hydrocarbon compound. In the hydrotreating unit, pure H2 is used to desulfurize the liquid fractions as shown in Eqs. (9) to (12).

The presence of naphthenic acids in crude oil is determined by the total acid number (TAN) technique. In this technique, the amount of potassium hydroxide (KOH) in milligrams that neutralizes one gram of crude oil quantifies the TAN. Crude oils are also said to be corrosive when their TAN is greater than 0.5. Based on TAN results, corrosion prevention techniques will be put in place.

Corrosion due to naphthenic acids follows the reaction shown in Eq. (14), producing naphthenates and hydrogen. This reaction gradually eats away the surface area of the metal, hence increasing in corrosion rate.

Another component that makes crude oil and distillates corrosive is the presence of CO2. The amount of CO2 can vary from reservoir location to location, most especially when CO2 enhanced oil recovery is applied. The dissolved CO2 in the crude oil leads to excessive corrosion especially in the presence of free water (Eq. (16)). This reduces the metal thickness (most cases carbon steel) after a period of interaction with CO2. Apart from the concentration of CO2 dissolved in the crude oil, the pressure of the crude oil also increases the corrosion rate. This is because the higher the crude oil pressure, the higher the CO2 partial pressure.

The formation of iron(II) carbonate (FeCO3) can precipitate out of the solution and form a protective layer on the metal surface, hindering further corrosion. However, a continuous buildup of the FeCO3 can cause a pressure drop along the crude oil pipeline, which leads to further challenges. Additionally, the precipitated FeCO3 can be disturbed and washed away by the high pressure crude oil, leading to further corrosion of the metal surface. (Further reading: An Intro to Pipeline Corrosion and Coatings.)

In order to combat such problems in crude oil pipelines, appropriate material selection (stainless steel) should be used. On the other hand, most of the CO2 with the crude oil exits the top of the atmospheric distillation column with the light ends. Therefore, CO2 capture using reactive amine solvents are used to remove CO2 from the gas stream. In such a case, the amine solvent removes both CO2 and H2S from the gas stream (acid gas removal unit) before fractionating them into methane (demethanizer), ethane (deethanizer), propane (depropanizer) and butane (debutanizer).

The presence of sulfur compounds, oxygen compounds, salts and water leads to excessive corrosion problems in crude oil pipelines and downstream distillates equipment. Therefore, it is imperative to reduce the concentration of these impurities.

The interaction between salts and water is a key contributor to corrosion in crude oil pipelines because of hydrochloric acid formation. The use of ammonia and filming amines has the ability to reduce the associated problems mostly at the top exit of the distillation column.

Sulfur compounds such as H2S, mercaptans, etc. are also linked to severe corrosion issues in crude oil refining units. Most of the H2S leaves with the vapor fraction of the crude oil, while some residual H2S and other sulfur compounds are present in the liquid distillates of crude oil. In the vapor line of the distillation column, ammonia (NH3) and filming amines are injected while H2 is used to remove all sulfur compounds from the liquid distillates (hydrodesulfurization). Any entrained H2S and CO2 leaving with the light ends from the top of the overhead separator is removed in the acid gas removal plant with reactive aqueous amine solutions. Hydrogenation reactions break down naphthenic acid into naphthenates and water, hence altering the corrosion reaction route. 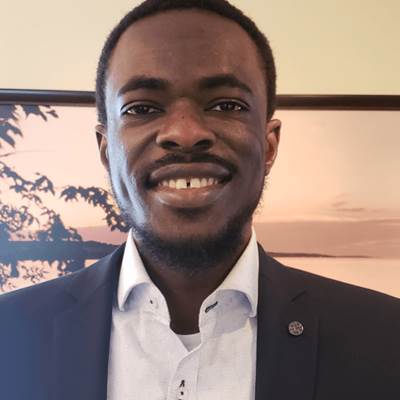