The 4 Key Types of Crevice Corrosion

Crevice corrosion occurs in areas of restricted geometries. However, the strategies that deal with it depend on the affected materials and operating mechanisms.

In order for crevice corrosion to occur, gap between the surfaces must be such that solution or moisture is able to enter but fluid convection is restricted, so fluid remains stagnant. Crevice corrosion occurs due to local changes in solution chemistry. However, it is useful to distinguish among the different mechanisms that lead to these chemical changes in order to understand the underlying phenomenon and to avoid or mitigate its detrimental effects. This article states the differences among the various types of crevice corrosion, describes their main features and shows some preventive strategies.

There are various localized corrosion processes that occur in environments with restricted geometries termed under the same name: crevice corrosion. However, affected materials and operating mechanisms are different and consequently the strategies to deal with them may vary and should be properly tailored. In this regard, four different types of crevice corrosion may be distinguished as described below. Corrosion processes in heat-transfer crevices are not considered in this article.

However, although this explanation has been generally accepted for years, nowadays it is known that oxygen concentration cells cannot account for this type of crevice corrosion on their own. Even though oxygen exhaustion is the first step in the overall process there are other subsequent steps that produce the crevice acidification which, in turn, leads to the high corrosion rate of the metal. After the metal dissolves as a metal cation into the crevice solution, this cation hydrolyzes and releases protons. The following set of reactions correspond to this mechanism for the particular cases of iron (Fe), carbon and low alloy steels.

In the absence of oxygen reduction, which otherwise would balance the pH change, the crevice solution becomes acidic.

Crevice corrosion driven by differential aeration cells does not need the presence of a depassivator anion (e.g. chloride), though such anions may worsen its effects. This type of crevice corrosion affects mainly carbon or low alloy steels but not stainless steels or other chromium-passivating alloys since the pH drop is not large enough to dissolve protective passive films. Filiform corrosion on aluminum (Al) and magnesium (Mg) alloys and corrosion beneath disbonded coatings and biofouling deposits on steel occur by this mechanism.

Read: How to Prevent Filiform Corrosion Under Coatings

This type of crevice corrosion affects passive metals or alloys that show an active-to-passive current peak in their anodic polarization curve, as shown in Figure 1. The resistance of the media (R) where an electrical current (I) is flowing through produces an ohmic drop of potential (Δφ). This ohmic drop is the product of the flowing current and the resistance of the media: Δφ = IR.

In some situations, a metallic material is able to passivate in a corrosive environment due to either the oxidizing power of the media or to an anodic protection system imposing a current on the metal. If a crevice is formed onto this metallic surface a potential drop occurs, leading the potential within the crevice to lower values. Depending on the values of I and R, this potential drop may be large enough to produce the depassivation of the metal within the crevice. When the ohmic drop exceeds a critical value (Δφ > ΔφCRIT), crevice corrosion occurs (Fig. 1). Corrosion product build-up within the crevice increases the value of R and thus Δφ. Like crevice corrosion that occurs as a result of differential aeration cells, crevice corrosion by ohmic drop of potential does not need the presence of a depassivator anion. This type of localized corrosion may affect passive alloys in oxidizing acidic solutions or in less oxidizing acids when anodic protection is applied. 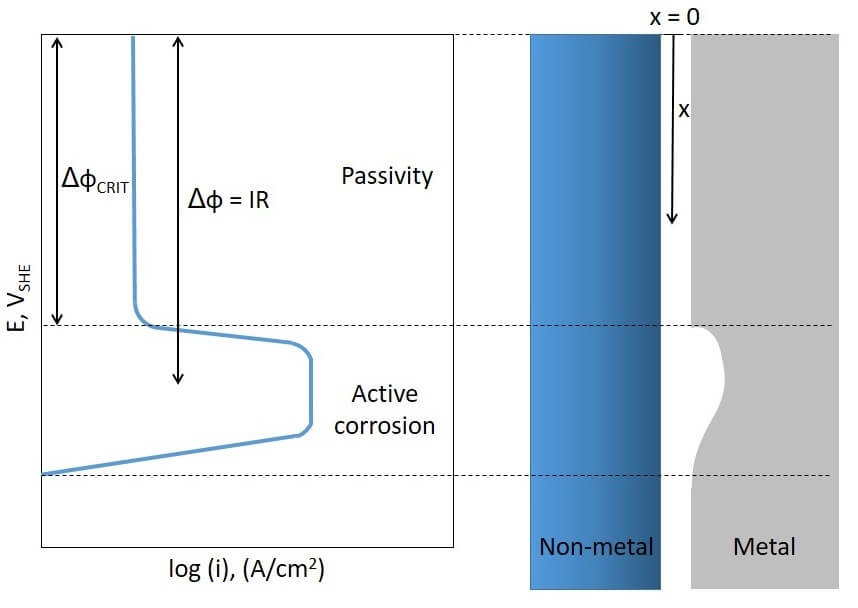 Figure 1: Polarization curve of a metal in an acidic solution and ohmic drop of potential along the crevice depth.Below a certain depth into the crevice the metal starts to suffer active corrosion.

Electrochemical depassivation is a type of localized corrosion that occurs to passive metals and alloys in the presence of particular aggressive anions (mostly chlorides) above a critical potential. This type of crevice corrosion is analogous to pitting corrosion. Local depassivation in pits and crevices is the same process from the viewpoint of electrochemistry. Differences between pitting and crevice corrosion are only due to geometric aspects. Localized corrosion results from a local acidification process. This phenomenon affects corrosion-resistant materials such as stainless steels, Ni-Cr-Fe alloys and Ni-Cr-Mo alloys when they are exposed to hot chloride solutions. All of them are protected by chromium-rich passive films. Titanium (Ti) and its alloys are also prone to chloride-induced crevice corrosion. Stabilization of metastable pits by the occluded geometry of crevices at high potentials and temperatures results in crevice corrosion as well. This process only happens in the presence of particular depassivating anions.

Chloride is the most common aggressive species in practical applications, although other anions such as bromides may also produce crevice corrosion. The resistance to crevice corrosion of an alloy is characterized by its repassivation potential (ER,CREV) and by its critical crevice temperature (CCT), which may be obtained by laboratory tests (ASTM G61 and G192 for ER,CREV, and ASTM G48 for CCT). The Pitting Resistance Equivalent (PRE or PREN) is an indicative parameter used to rank stainless steels and nickel alloys with regard to localized corrosion resistance in chloride-containing environments. There are various equations for calculating PRE values in the literature. They differ in the considered alloying elements and their weighting factors. The most common equations are listed below.

The metallurgical condition of the material greatly affects its resistance to crevice corrosion. Chromium-depleted regions such as those produced by carbide precipitation at grain boundaries (sensitization) in austenitic stainless steels increase their susceptibility to localized corrosion. Among environmental variables, chloride concentration, temperature and the oxidizing power of the solution play significant roles.

This type of crevice corrosion occurs due to the ability of crevices to gather and retain water or moisture when equipment is exposed to the elements. Rainwater or dew water enters crevices very easily. Exposure to sun radiation and wind eventually removes water from surfaces. However, crevices may remain wet when boldly exposed surfaces are completely dry. Consequently, corrosion continues within crevices while it has stopped on the outside. Wet-dry cycles may aggravate the situation by concentrating salts within crevices.

Crevices should be avoided whenever possible in the design of any equipment. Unfortunately, this is not always easy to achieve. The use of fasteners in joints inevitably lead to crevice formation. Even when it is possible to avoid crevices by design they may form spontaneously in service by precipitation of solid particles, biofouling or coating disbonding. The use of more corrosion resistant materials may help to mitigate the effects of crevice corrosion. Care must be taken when joining together dissimilar metals since galvanic effects worsen the situation by increasing the corrosion rate of the less noble material.

Using passive alloys such as stainless steels minimizes the detrimental effects of differential aeration cells. However, if chlorides are present in the media at a high enough concentration, crevice corrosion may occur by electrochemical depassivation. In such cases, an alloy with a higher PRE value should be specified. If the open circuit potential of the alloy is below the critical potential (ER,CREV), localized corrosion will not occur. This may be achieved by galvanically coupling the alloy with a less noble material such as carbon steel (sacrificial anode). Other corrosion control strategies include decreasing the concentration of oxidizing species in the environment (such as O2, H+, Fe3+, Cu2+, etc.), addition of inhibitors, alkalization, reducing the concentration of chlorides (or any other aggressive species) and lowering the temperature.

Crevice corrosion is an insidious type of localized corrosion suffered by metallic materials when exposed to stagnant solutions that develop within crevices. Overall preventive strategies include design optimization and materials selection while more specific corrosion control measures should be tailored depending on the particular type of crevice corrosion mechanism.