Naphthenic Acid Corrosion, the Bane of a Refiner

Knowing what you are up against is half the battle. Predicting, mitigating and the impact of various components contributing to Naphthenic Acid Corrosion are discussed here.

What is Naphthenic Acid?

Naphthenic acids are an aliphatic acid with zero to three fused cyclopentane or cyclohexane rings, an alkane chain and a terminal carboxylic acid group. The general formula for NA is CnH2n+zO2, where z is the hydrogen deficiency (a negative even integer). There are many different possible structures and amounts of NA in the crude. This is because the geographic region of crude impacts the specific acid structure distribution, which is related to the biodegradation of the crude as the oil field matures. Elevated concentrations of NA can be found in crudes from Venezuela, India, California and Russia. (Read also: The 6 Corrosive Components Found in Crude Oil.) 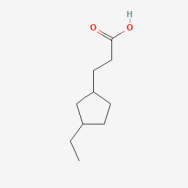 Corrosion of Steel by NA

Iron (Fe) reacts with two NA molecules to produce an oil soluble iron naphthenate and H2. The corrosion reaction causes a steady depletion of Fe from the surface resulting in through wall corrosion. The morphology of the NA attack is very localized and exhibits pitting with sharp edged holes in the metal surface.

Assessment of NA content in oil is typically measured in terms of total acid number (TAN) per ASTM D664. This test method determines the acid level of petroleum product soluble in mixtures of toluene and propan-2-ol that are potentiometrically titrated with KOH.

TAN is given in terms of milligrams of KOH needed to neutralize a 100g sample of oil. UOP method 565 gives a slightly lower TAN because some of the non-naphthenic species are removed prior to analysis.

ASTM 974 is a colorimetric method for determining TAN and results in a lower TAN number but is limited due to the intense dark color of the sample when dissolved in the titration solvent. A more recent method is ASTM D8045, which allows greater variation in solvent composition.

Generally, a TAN greater than about 0.3 for raw crude oils and 1.5 for distillates is required for initiating corrosion of carbon steel. However, sweet crudes (less than 0.5% S) with a TAN less than 0.5 have been found to be quite corrosive.

TAN does not explain the corrosivity of NA and thus make predictions of corrosivity difficult. For example, ASTM D664 cannot differentiate between organic acidity, acid gases and hydrolysable salts. It has also been observed that crudes with a TAN of 0.1 can cause extensive NA corrosion. In addition, fatty acids, which contribute to TAN, thermally breakdown at lower temperatures and contribute little to any corrosion. Thus, although still widely used by the industry, it is not predictive of the corrosivity for any given crude oil.

Another complicating factor for the corrosivity of NA is the presence of sulfur (S) in the crude. Low levels of S can inhibit the NA corrosion while higher concentrations can produce sulfidation corrosion.

NAC is differentiated from sulfidic corrosion by the nature of the corrosion (pitting and impingement) and by its severe attack at high velocities in crude distillation units.

The type of organosulfur compound is also critical because mercaptans can thermally degrade to produce H2S while thiophenes cannot.

NAC can be retarded by sulfur-containing compounds inherently present in crude oil fractions in the form of soluble sulfides. Although these sulfides can be corrosive as well, they can also form iron sulfide scale on metal surfaces, potentially offering a degree of protection against naphthenic acid attack.

H2S is the critical species that impacts the NA corrosion with the potential formation of a protective FeS scale. This scale, however, can be removed by the combined effect of high velocity and NA attack. NA corrosion typically has a localized character, particularly at areas of high velocity; while sulfidation attack is a more general mass wastage.

The effect of fluid flow is an important factor for increased NA corrosion and thus high corrosion rates are often observed in transfer lines. Some studies have correlated a linear relationship with flow velocity or wall shear stress while others have suggested that there is a threshold value for onset of flow induced corrosion. (Read also: Internal Corrosion of Pipelines Carrying Crude Oil.)

High velocity flow can also remove the FeS layer and accelerate the corrosion of steel. API RP 939-C recommends a velocity of less than 60m/s to maintain any FeS scale. Note that wall shear stress, the mechanical force produced on the metal surface by the flowing media, is a more correlative factor for NA corrosivity.

As already noted, temperature can impact NA corrosion. Naphthenic acid corrosion occurs primarily in high-velocity areas of crude distillation units in the 430°F to 750°F (220°C to 400°C) temperature range. corrosion damage is not observed at temperatures above 750°F (400°C), most likely because of the decomposition of naphthenic acids or protection from the coke formed at the metal surface. Highest corrosion rates tend to be at the condensation temperature of the NA such as flashing zones.

Because of the complexity of the NA in the presence of sulfidation, corrosion models tend to be generic observations or proprietary empirical correlations. Predictive and evaluation of NA corrosivity continue to evolve. Much of it is based on experimental corrosion testing and supporting analyses of the NA and organosulfur compound speciation. Joint Industry Programs can provide the corrosivity data for developing predictive software.

Incorporation in the model of surface chemical reactions may provide further improvements because the controlling process maybe either the solid-state diffusion of Fe through the inner scale or the rate of chemical reactions on it.

Refiners can mitigate the NA corrosion in a number of ways. One approach is through a better material selection. Carbon steel alloys are widely used in oil refineries and provide a good protection against NA corrosion at temperatures lower than 230°C. Higher chromium alloys such as 5Cr 1/2Mo generally provide better protection against both NA and sulfidation corrosion processes but not always. Austenitic stainless steels such as 316L can be quite effective.

Various mitigation techniques can include reducing fluid velocity conditions, removal by pre topping, and crude oil blending when processing of lower quality crude oils. Blending a high TAN crude such as an “opportunity crude” with a low TAN crude may result in enhanced corrosion because of the addition of more aggressive species. Pre-topping the oil to break down the acids prior to distillation is energy intensive and expensive. Injecting inhibitors can be used but is a costly approach. Although not a mitigation approach, online corrosion monitoring in vulnerable locations is being implemented to reduce emergency shutdowns. (Read also: IoT for Corrosion Monitoring in the Oil and Gas Industry.)

Adding molybdenum to stainless steel can produce alloys resistant to NAC, and phosphorus-based inhibitors are also used for mitigation.

Mitigation of the NAC is normally done in one of two ways or a combination of them. use of superior grade of construction materials with increasing amounts of molybdenum is most effective, with type 316 and 317 stainless steels offering good resistance under most circumstances where low alloy steels does not offer cost effective resistance.

However, under severe conditions for NAC, upgrading to 6% Mo alloys has been effective. The other main mitigation method is crude and process cut blends to have below a certain preset TAN in the crude or process cut. Some companies have also tried using NAC inhibitors.

Quiz: Health and Safety in the Oil and Gas Industry