Gas turbines are an extremely critical and important piece of equipment used in many industries such as oil and gas, electrical power generation and aviation. Unfortunately, the high temperatures found inside gas turbines, along with contaminants, rapidly accelerate the corrosion process even faster than normal oxidation. When material is consumed, its load-carrying ability is reduced, and in the worst case, ultimately results in catastrophic failure.

Gas turbine engines, commonly known as jet engines, are used as a prime mover to power most modern civilian and military aircraft.

While operating, outside air is directed by the intake into the engine towards the compressor as shown in Figure 1. The air is then compressed through a series of stators and rotors (Figure 1, label a). The pressure can increase by 24 times in 15 stages in a modern axial-flow compressor. In the combustor (Figure 1, label b), the compressed air is mixed with fuel and burned to produce thrust. A spray nozzle is used to atomize the fuel and an electric igniter is used to initiate combustion of the fuel/air mixture. The combustion process increases temperature to about 1,930°C (3,506°F). However due to current material limitations, the maximum allowable temperature for turbine engines is only about 1,100°C (2,012°F). Hence, only a fraction of the air is used to support combustion while the remainder is used to cool the turbine. 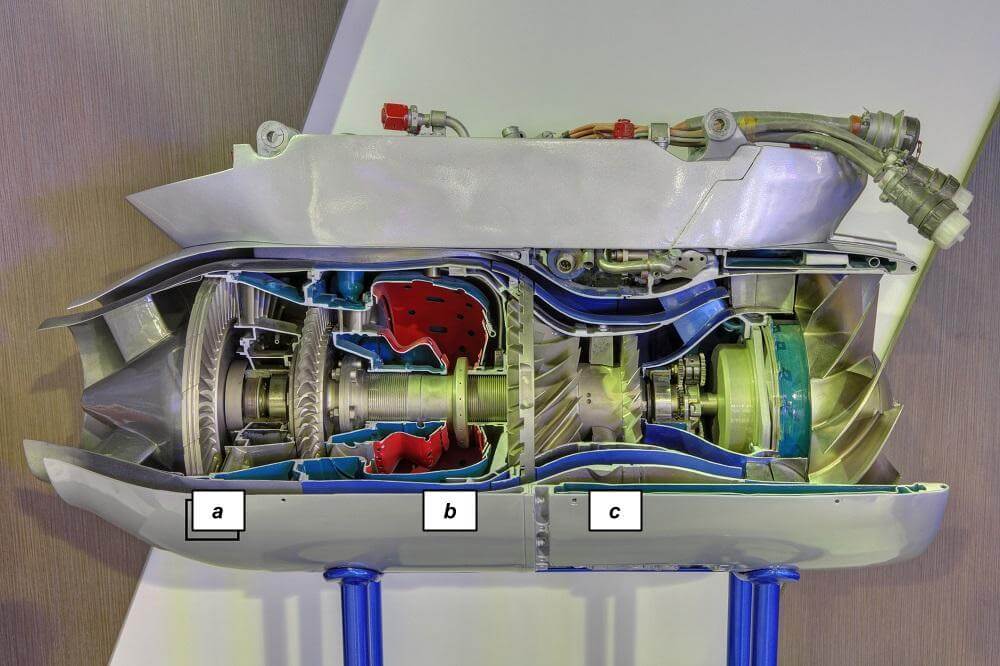 After the combustor, the hot exhaust passes through the turbine (Figure 1, label c). As the gas is expanded through a series of stators and rotors, the pressure decreases and energy is converted to turn the compressor via a central shaft. Cooling equipment and coatings are often used to keep the turbine blades from melting. The gases are finally accelerated at the exhaust end to produce thrust (Figure 2).

Type I high-temperature hot corrosion (HTHC) is commonly observed in the temperature range of 850 to 950°C (1,562 to 1,742°F). The HTHC process begins when condensed alkali metal salts are formed on the surface of components. A series of chemical reactions occur that attack the protective oxide coating and deplete the chromium element from the material. With less chromium content, the base material is rapidly oxidized and porous scale starts to form.

Type II low-temperature hot corrosion (LTHC) is commonly observed in the temperature range of 650 to 800°C (1,202 to 1,472°F). One of common materials used to construct the turbine blades, cobalt-based alloys, react with sulfur trioxide (SO3) from the combustion gas to form cobalt sulfate (CoSO4). A mixture of sodium sulfate (Na2SO4) and CoSO4 is responsible for the typical pitting found in LTHC.

Closer to the root of the blades, the temperature is normally lower than the temperature of the other parts. Therefore, these regions are prone to be affected LTHC. There may be a loss of material and thickness due to the combined effect of HTHC and fatigue at the tip of the turbine blades. There is also a presence of green coloration that is a macroscopic feature of HTHC. Furthermore, there may be further damage especially near the trailing edge of the blades, which indicates that the sulfur from the fuel might have reacted with the protective oxide layer and attacked the base material.

Various mitigation measures against hot corrosion of gas turbine components are presented in the sections below.

Material selection determines the mechanical strength and corrosion resistance at high temperatures. Unfortunately many alloys have an inverse correlation related to these two perimeters. For example, tungsten and molybdenum are excellent at improving mechanical strength but highly susceptible to hot corrosion. Therefore, the best practice is to make the necessary trade-offs in material selection and apply protective coatings to improve corrosion resistance.

Chromium is the most effective element for improving corrosion resistance in alloys. Other proven elements include cerium, lanthanum, platinum and titanium. The chosen alloy should also have good adhesion to its protective oxide and microstructure with no secondary phases that are prone to accelerated attack. (Be sure to check out our Guide to Corrosion-Resistant Metals.)

There are three categories of protective coatings: diffusion, overlay and thermal barrier coatings. Diffusion coatings are achieved by enriching the surface of an alloy with either aluminum, chromium or silicon. Overlay coatings are corrosion-resistant alloys that are designed for high temperature protection. Thermal barrier coatings are used to insulate the substrate from the heat of the gas flow. The coating system consists of an outer ceramic overlaid on an oxidation-resistant bond coat. (For more information on ceramic coatings, read Top 5 Applications for Ceramic Coatings.)

Deluge washing with plain water minimizes heat corrosion by dissolving and removing salt and other contaminants needed to initiate hot corrosion. The engine maintenance manual typically contains a detailed washing procedure. Washing frequency is determined by the severity of the corrosion. Washing may be required before each flight or once a month. It can be adjusted based on the results of a borescope inspection.

The installation of a high-efficiency air filter is another protection approach against heat corrosion. Hot corrosion does not occur if the content of Na in the air is below 0.08 ppm.

To prevent the initiation and propagation of heat corrosion, the content of alkali metal, vanadium and sulfur in the fuel must be carefully controlled. The maximum allowable impurity content in the fuel is defined as 0.2 - 0.6 ppm (Na + K), 0.5 ppm V, and 1% S.

Additives (e.g., Mg, Cr, Ca and Ba) are added to the fuel to decrease the corrosion rate. The addition of MgO can alleviate the effect of using a high level of vanadium in fuel. The result is that magnesia will react preferentially with vanadium pentoxide (V2O5) to form Mg3V2O8 with a higher melting temperature.

Hot corrosion is a concern in gas turbines that can lead to a failure. To avoid catastrophic failure, hot corrosion must be prevented and detected at an early stage. The cause of turbine blade failure may be due to the combined effect of hot corrosion and other mechanism such as fatigue.

The risk of hot corrosion can be successfully mitigated by applying a proper combination of preventive measures such as alloy selection, protective coatings, washing of hot components, air filtering and fuel quality improvements.

5 Things to Know and Understand About Titanium Corrosion