Polythionic acid stress corrosion cracking of austenitic stainless steel is a complex phenomenon that requires a sensitized microstructure, a sulfide scale, exposure to oxygen, liquid water and tensile stress. The potential of cracking can be prevented by an appropriate soda ash neutralization solution or removal of liquid water during a shutdown.

Polythionic acid stress corrosion cracking (PTA-SCC) of austenitic stainless steel is a type of environmentally induced cracking that requires not only the appropriate environment and a tensile stress, but also a specific microstructural condition. This type of failure can occur in a refinery, chemical or petrochemical plant when a sulfide scale is formed on a metallic surface. (For an introduction to PTA-SCC, read Chloride, Caustic and Polythionic Acid Stress Corrosion Cracking.)

The specific microstructure that is required is referred to as sensitization, which is the precipitation of Cr-carbides (M23C6) in the grain boundaries that occur upon prolonged exposure in the temperature range of about 400°C to 800°C (752°F to 1472°F) that leaves adjacent regions depleted of Cr. These depleted Cr regions are susceptible to intergranular attack and PTA-SCC. The lower temperature limit is a function of the kinetics of carbide formation while the upper temperature limit is related to the carbon diffusing back into solution of the metal. This results in a “C-shaped” time-temperature-transformation curve, with the nose of the curve and the upper and lower temperature limits varying based on the alloy composition. 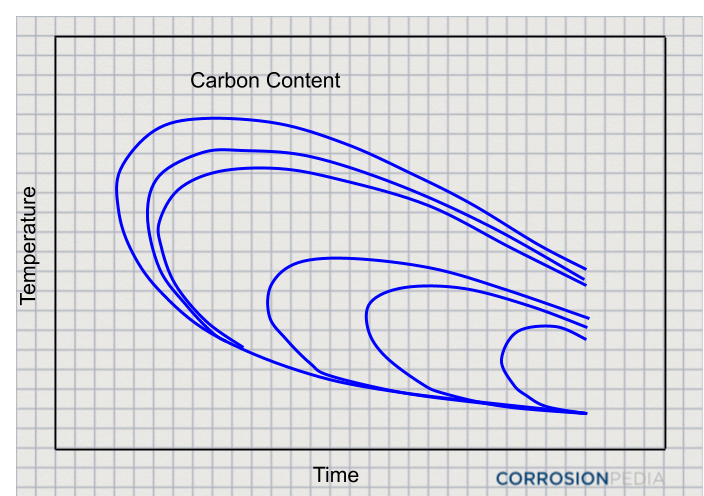 Figure 1. Example of a time-temperature-transformation curve for an alloy with various amounts of carbon content.

The addition of Ti or Nb to an austenitic stainless steel such as with Types 321 and 347 produces a stabilized grade that takes a substantially longer time to sensitize. The same is true for the low carbon or dual-certified grades with carbon content less than 0.03%, but these too will also eventually sensitize after an extended period of time at these temperatures.

Note that the low carbon grades have a lower creep strength and may not be applicable for certain applications. Cold working of these alloys tends to increase the sensitization at lower temperatures and decrease it at higher temperatures. Applied stresses and strains during sensitization can enhance the kinetics by accelerating the nucleation and growth process involved in the carbide precipitation process. Welding of the high carbon Type 304H grade can also result in sensitization at or near the heat affected zone depending on the cooling rate.

The second requirement for PTA-SCC is a continuous sulfide scale on the metal surface. The sulfide scale forms from the reaction of sulfur species in the process stream such as hydrogen sulfide (H2S) reacting with the metal surface. An organic sulfur compound under reducing conditions can also produce the requisite sulfur species. The organic sulfur could be present naturally in the process stream or purposely added, such as when carbon disulfide or dimethyl disulfide is added to prevent coke formation in the reactor. (Related reading: 5 Key Questions About Corrosion in Carbon Capture Processing Plants.)

Depending on the S concentration, temperature and reducing conditions, the outer scale can be non-existent (Cr-O-rich), Cr-S-rich, Cr-Fe-S-rich, Fe-S-rich, Fe-Ni-S-rich or Ni-S-rich. A theoretical thermodynamic assessment combined with experimental data can be used to evaluate whether the process conditions will produce a continuous sulfide scale. If the oxide is the predominant scale formation, then the potential of PTA-SCC will be most unlikely. Such is the case for the regenerator section of the fluidized catalytic cracking unit (FCC), which is oxidizing; while on the reactor side, which is reducing, there is a greater potential for PTA-SCC. However, a partial-combustion FCC regenerator system having H2S and a reducing ratio of CO/CO2 in the flue gas has the potential to be susceptible to PTA-SCC. Thus, the presence of H2 is not the critical factor for producing reducing conditions in the process stream.

PTA-SCC often occurs sometime after a shutdown such as a turnaround. The reason is that once the continuous sulfide scale has been formed on the metal during operation, it is the reaction of this scale with O2 and liquid water during the shutdown that forms the polythionic acid that ultimately cracks the metallurgy. Thus, the cracking will initiate during the shutdown, but then propagate to failure during startup or operation. The reaction of moisture and oxygen in the air with the sulfide scale form what is referred to as polythionic acid (H2SxO6), which then attacks the metal down the Cr-depleted grain boundaries. It is the tetrathionic acid (H2S4O6) that is considered to be the relevant species. PTA can form in the presence of FeS via the reaction:

Sulfuric acid (H2SO4) does not cause PTA-SCC but can cause corrosion depending on the concentration and temperature.

Thiosulfate anions (S2O3=) can cause SCC. Such solutions have been used to study PTA-SCC.

The Role of Tensile Stress in PTA-SCC

As with the other stress corrosion cracking failure modes, an applied or residual tensile stress is required. However, since most PTA-SCC failures are associated with elevated temperature exposures and operations, determining the presence or extent of any tensile stress is quite complex because of variations in component thermal expansions and contractions. The interaction of degree of sensitization and stress required to initiate PTA-SCC is not well understood. Work hardening, applied stress and temperature all impact the extent of sensitization. The amount of sensitization and the stress at the crack tip determine the propagation of the stress corrosion crack. As noted by researchers A.K. Yonezu, R. Kusano and X. Chen, “the present IG-SCC behavior is attributed to the synergistic interaction of electrochemical and mechanical actions... It was found that the SCC tip advanced along the grain boundary with further mechanical loading. This suggested that the stress component plays a significant role during SCC propagation…”

Upon opening the process unit (e.g., hydrocracker reactor and associated piping) after a shutdown, the primary objective for preventing PTA-SCC for units operating in the sensitization temperature region is to prevent liquid water or O2 from the air to react with surface sulfide scale. One approach is to use an inert gas such as dry nitrogen that is free of O2 during entry. Given the required personal protective equipment (PPE), this can be quite cumbersome for workers.

Another approach is to use dry (dehumidified) air; however, entry by workers can ingress outside humid air and sweat from workers can negate this tactic.

One of the most common techniques is to use a sodium carbonate or soda ash solution to neutralize the acids formed on the metal surface and to leave a thin alkaline film that will prevent additional PTA formation as described in NACE Standard RP0170. Water used for the wash solution should have minimal amounts of chlorides or there is the potential of having chloride stress corrosion cracking (Cl-SCC). Adding an alkaline surfactant may promote penetration of coke and oil films. (Related reading: Chloride Stress Corrosion Cracking of Austenitic Stainless Steel.) For prolonged shutdowns reapplication of the wash solution may be necessary.

A stabilized heat treatment for Types 321 and 347 alloys is designed to minimize the potential of PTA-SCC and can be performed after all welding operations. The stabilizing heat treatment is intended to diffuse the C back into the grains and reform the Ti or Nb carbides, which has the unintended consequence of strengthening the grains. For thick-walled structures (>2.5 cm) it is not recommended because of the potential of stress relaxation cracking.

Changing from a stabilized grade of stainless steel to a Ni-Fe-Cr alloy such as Alloy 825 or 800 will not prevent PTA-SCC because these alloys can also sensitize. A proprietary Type 347LN has been reported to not sensitize and thus is not susceptible to PTA-SCC but still have creep strength comparable to Type 347H.

Identification of the failure mode as being PTA-SCC requires optical metallographic analysis of a polished cross-section. The crack propagation is by a branched intergranular (along grain boundaries) mode. It is not unusual to have grains fall out during the sample preparation. 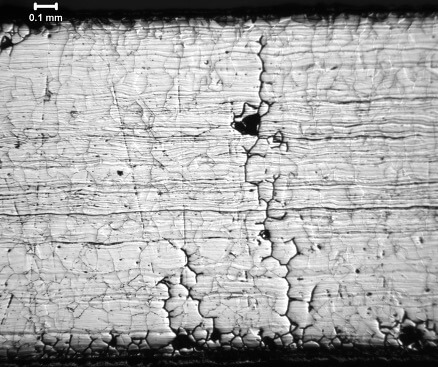 A general etchant should be initially used to examine the microstructure. At higher magnification the grain boundaries should be examined for carbide formation.

To confirm that the metal has been sensitized, ASTM A262, Practice A oxalic acid etching should be performed and examined as to whether the grains are completely surrounded by ditching, which is indicative of a sensitized microstructure.

How and Why a Material Fractures