Liquid-infused porous coatings resist biofouling by infusing the metal substrate with a lubricant. This gives the surface a slippery property that prevents the adhesion of bacteria and other organisms.

Metals are ubiquitous in our daily lives. This versatile material is used in numerous applications from cooking utensils to building and transportation infrastructures. Despite being known for their susceptibility to corrosion, their surfaces have remained mostly unchanged and unimproved over the years.

The increase in demand for steel in aggressive environments has fueled research into the study of corrosion protection. While electrochemical corrosion has received ample attention, protecting steel from microbial attack has remained a challenge.

Biofouling and Its Link to Microbially Influenced Corrosion (MIC)

Biofouling, also known as biological fouling, refers to the buildup of microorganisms, algae, organic matter and plant life on the surface of a material. This phenomenon is especially prevalent in the maritime and wastewater industry, where high concentrations of bacteria and other microorganisms are present. This type of accumulation is classified as epibiotic because the surface and the organisms attached to it do not share a parasitic relationship.

On metallic substrates, microbial buildup adheres firmly to the surface and, combined with other products produced by metabolic processes, manifest as a gelatinous organic matrix known as a biofilm. This consortium of microorganisms, which are present in the biofilm, play an essential role in the microbiologically influenced corrosion (MIC) of metallic substrates across a number of industries.

Sulfate-reducing bacteria, in particular, are considered to be instrumental in the corrosion of piping infrastructure. In wastewater piping, for example, biofilms accumulate and adhere to the inner walls of the pipeline. The thousands of bacteria contained in the biofilm feed on the nutrients in the wastewater to produce a variety of metabolic products, including hydrogen sulfide gas. Once the sulfide gas makes its way to the surface of the fluid, it reacts with air and moisture to produce sulfuric acid, which is especially aggressive towards metallic surfaces.

In addition to corrosion, biofouling can also have several other detrimental effects such as tuberculation. The unabated buildup of microorganisms and biofilm can reduce the internal diameter of the pipeline, which can lead to hydraulic issues such as reduced capacity, low flow rates and damaged pumping equipment. (For more on pumping infrastructure, see Corrosion Prevention for Water Pumps, Valves, Impellers and Fittings.) In the maritime industry, biofouling can result in damage to the hull and propulsion systems of marine vessels. This accumulation can also increase the hydrodynamic friction of some vessels, leading to increased drag and fuel inefficiencies.

What is a Liquid-Infused Porous Surface Coating?

Successfully modifying materials such as steel to resist biofouling and MIC in marine, wastewater and other affected industries has been challenging. While anti-fouling coatings are available, they possess several limitations that make them unsuitable for specific applications. (These traditional coatings are discussed in Coatings for Marine Applications & Offshore Platforms.)

Liquid-infused coatings represent the next step up from traditional anti-fouling paints and coatings. This type of coating consists of a liquid lubricant that is stabilized within a porous or textured surface via capillary action.

Liquid-infused porous surface coatings consist of two distinct elements: a textured or porous solid layer and a lubricant. The solid surface, which is usually the substrate to be coated, must be treated with the appropriate texture and surface chemistry to accept the lubricant. The liquid then spreads throughout the solid substrate and wicks into the textured (porous) surface. As a result, the lubricant-impregnated surface acts as a barrier when it comes into contact with an immiscible liquid. This characteristic gives the coating a "slippery" property as it repels incoming fluids away from the substrate. If applied correctly, any incoming fluid will not displace the lubricant.

While traditional coatings also consist of a solid (pigment particles and binder) and liquid (solvent) component, the drying process removes the solvent, leaving a single dry, solid surface. In contrast, the liquid component of liquid-infused surfaces is formulated to stay "wet" and maintain their slipperiness over time. 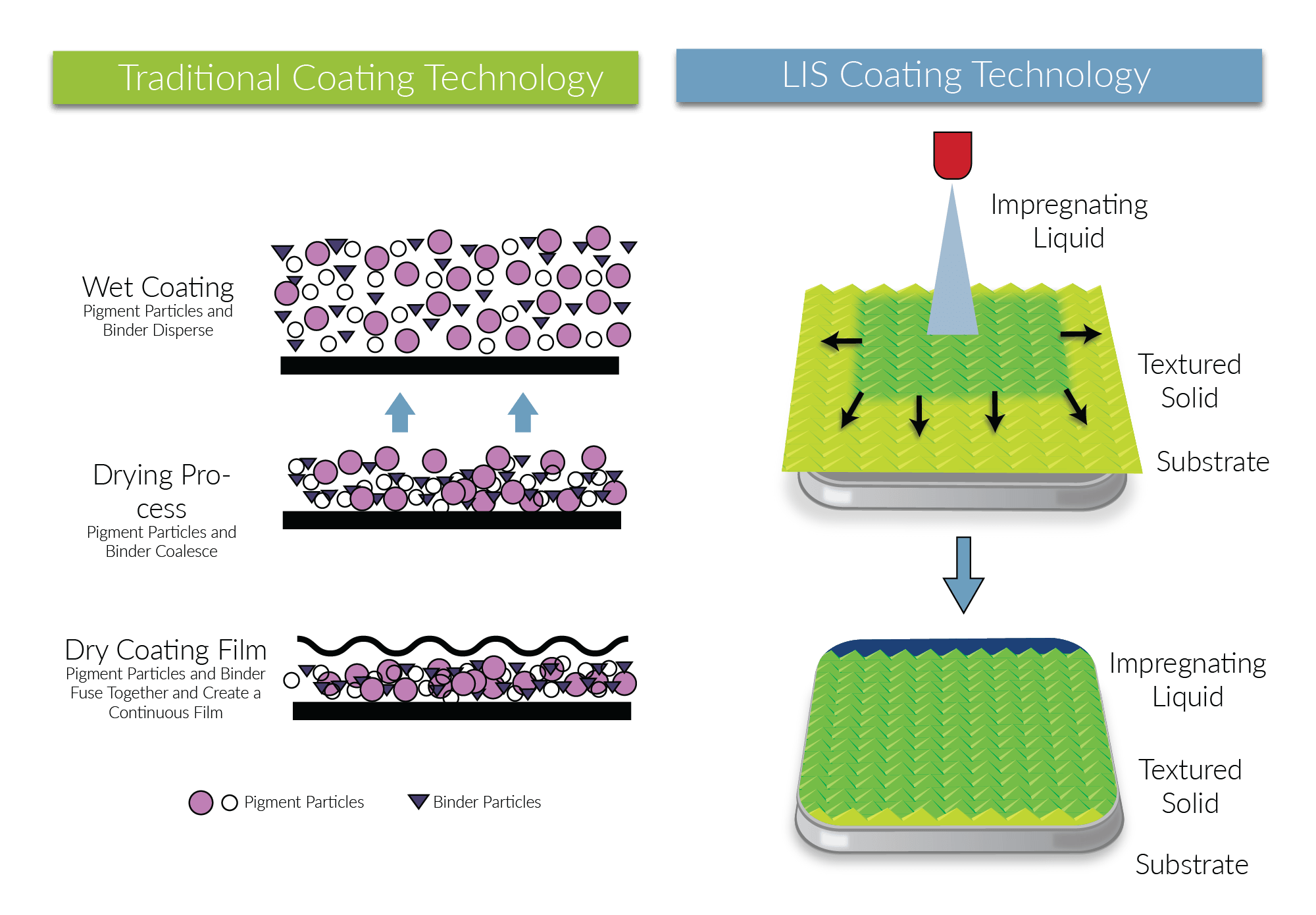 The primary mechanism by which biofouling and MIC occurs is adhesion. Fluids containing microorganisms need to stick to the material to allow the surface to host biofilm growth. Since liquid-infused porous surfaces are impregnated with a lubricant, they repel all incoming fluids, thus creating an environment where bacteria cannot attach themselves. This makes surfaces treated with liquid-infused technology unconducive to bacterial and biofilm growth.

At least one scientific study confirms the efficacy of these coatings. A research team from the Wyss Institute for Biologically Inspired Engineering at Harvard University conducted various tests on the anti-wetting properties of these coatings using a wide variety of liquids, including water, oil and biological fluids containing bacteria and blood. The results showed that the surface was able to repel all liquids that could lead to biofouling.

In addition to marine, wastewater and petrochemical uses, liquid-infused porous surface technology can also be used in the medial industry, where tools and equipment must resist biofouling from blood and bacteria. Additionally, further research is being conducted into applying liquid-infused porous surface coatings to a wider variety of metals to increase their use cases and applicability.

How Liquid-Infused Surfaces are Treated

The key to an effective liquid-infused surface is the proper combination of surface chemistry and topology. This ensures maximum compatibility between the textured solid surface and the lubricating liquid. The selection of the solid and liquid components of the system is, therefore, highly crucial to the coating design process. 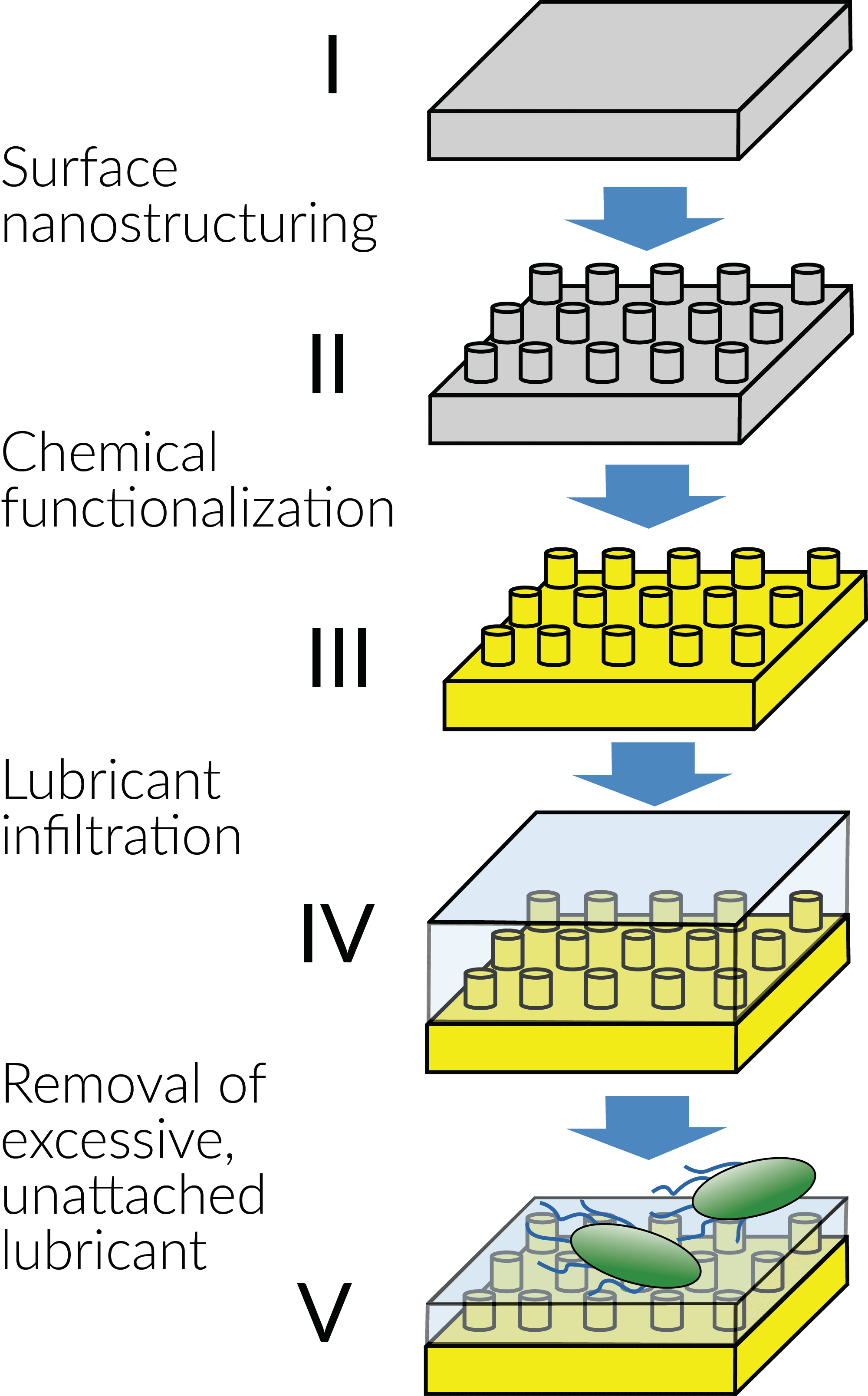 The typical preparation for a liquid-infused porous surface coating is as follows:

Liquid-infused porous surface coatings have the potential to benefit a broad range of industries. In the wastewater and petrochemical industries, treated pipelines can be used to move viscous liquids with significantly higher efficiencies. In contrast to other anti-fouling and hydrophobic coatings, liquid-infused surface coatings can be formulated to maintain their lubrication over the life of the substrate.

While the design parameters for this type of coating are complex, they can be scaled to commercial applications. With continued research and awareness, the coating industry could very well see a shift from dry film coatings to durable and long-lasting "wet" surfaces.