Fretting corrosion is a type of tribocorrosion that is caused by small cyclic movements between two materials combined with corrosive attack from the environment. 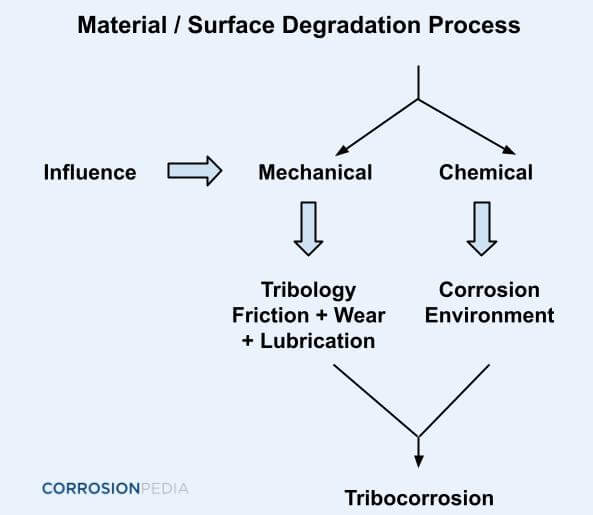 What is Fretting Corrosion?

Fretting corrosion is not a newly discovered failure mode. It was initially described in 1911 by Eden, Rose and Cunningham in reference to a type of corrosion observed on a steel part of a fatigue testing machine. In 1939 Tomlinson, Thorpe and Gough termed the phenomenon "fretting corrosion". Since then, fretting corrosion has been observed on soft metals such as aluminum and on hardened steels. (Related reading: 10 Key Benefits of Case Hardened Steel.)

Fretting corrosion is a surface damage phenomenon that is caused by small cyclic movements between two materials combined with corrosive attack from the environment. Cyclic amplitudes can be as small as 3 to 4 nm. Fretting damage such as from very small oscillating rubbing displacements can occur in a vacuum and is the result of relative micro-slip. However, in normal air, corrosion can play an active role in enhancing the damage, and therefore the phenomenon is referred to as fretting corrosion. Initiation of fretting corrosion may lead to more rapid failure such as abrasion corrosion through the formation of abrasive particles.

Oxidation is the most common corrosive environment for fretting corrosion. As fine, deformed metal particles are removed from a surface by the mechanical cyclic motion, they are oxidized and trapped between the fretting surfaces. These oxide particles then act as an abrasive with a subsequent increase in material removal. If the damaged passive film cannot be re-passivated, further material loss will occur. In addition, when the surface passive film is mechanically damaged, charge transfer can occur at the interface without any resistance from the protective film and increase the amount of friable (easily crumbled) oxide particles.

The topography and the chemical composition of the contacting surfaces also play a critical role. This can include the initial surface roughness, formation of plastically deformed surface layers due to rubbing or impacts, relative hardness of the two surfaces, the growth and the mechanical properties of oxide films formed, and the formation of any reaction product layer and its adsorption.

Microstructure of the materials and the presence of defects can impact the tribology properties and corrosion resistance of the surfaces. These can include phase distribution, nonmetallic inclusions, segregations and grain size and orientation. For example, the presence and thickness of the oxide can impact the level of plastic deformation and depth of surface penetration made by the harder asperities into the softer surface.

The surgical alloys that have been used in modular hip implants owe their corrosion resistance to the formation of a stable passive oxide film. However, the repetitive motion at the ball and socket of the hip replacement implant can lead to fretting corrosion with a continuous breakdown and re-passivation of the protective oxide layer. Continued repeated breakdown and re-passivation consumes the oxygen in the removed metal, which can then promote the initiation of crevice corrosion. For that reason, the materials now used for hip replacement implants tend to no longer be metal on metal. In addition, design changes have been made to reduce the relative motion between components.

Dental implants are subjected to variable amplitude cyclic micro-movements caused by the transmitted loads during mastication. Oblique loads can promote fatigue. The chemical environment of the mouth is quite complex and harsh and can include saliva, bacteria that can produce microbial induced corrosion (MIC), acidic foods such as soft drinks and fluoride from dental rinses.

Fretting corrosion is a common failure mechanism for tin plated copper electrical contacts. The accumulation of oxidation products at the contact spot is caused by the micro-motions of the contact. Tin is a soft metal and rapidly forms a thin and hard oxide. When the hard oxide layer gets broken, it can be pressed into the soft and ductile tin matrix where it can accumulate. It has been speculated that it is the micro-slip action between the contacts that creates the fretting, which combined with the oxidation causes the thick insulating layer at the contact interface and the substantial increase in contact resistance and ultimate failure of the contact.

Compressor blades of a gas turbine undergo centrifugal forces during operation and in combination with vibratory load can cause a fretting motion between the dovetail joint of the compressor blade and the disc. The debris that is trapped between the contact areas can then be oxidized at elevated temperature, resulting in fretting corrosion.

For wind turbines the oscillating movement between the rolling element and raceway of the blade bearing can give rise to fretting corrosion or other types of tribocorrosion. Note that if a lubricant is used and there is damage, the appropriate term to use is false brinelling. However, the loss of lubricating film will transition from false brinelling to fretting corrosion.

Tribocorrosion often occurs between the contacting surfaces of either the journal and bearing bore or the housing and the outside bearing diameter. During operation under load the motion results in small wear particles that oxidize. These oxidized particles further abrade more metal. Steels tend to be most susceptible. Since there is no cyclic load, this type of tribocorrosion is really sliding wear corrosion but is sometimes incorrectly referred to as fretting corrosion. It is not normally considered a catastrophic failure mode, but can be the root cause as it may prevent the bearing from properly functioning and ultimately leading to a failure.

Prevention of fretting corrosion starts with preventing fretting. This can include design changes, dampening any vibrations, and making certain that all joints are properly tightened. Combining the simulation of finite element analysis (FEA) for fretting with electrochemical calculations for corrosion can be used to evaluate the potential of fretting corrosion for a given design.

For electrical contacts the most effective approach is to avoid the relative motion or slip in the contact region of mated connector parts by designing the contact to minimize the micro-motion or by using a low spring rate (the amount of force needed to extend or compress a spring). (Related reading: Understanding and Preventing Fretting Corrosion Damage in Electrical Devices.) Plating the mating contact surfaces with gold is an expensive option but even that does not eliminate the potential of fretting corrosion.

With medical implants, design changes that increase the stability of the interface can minimize fretting corrosion. Materials changes to include a cross-linked polyethylene and more abrasion resistant ceramics are being used for some applications such as hip replacements.

Shot peening to produce plastic yielding and residual stresses at the surface to improve fretting fatigue resistance has been used with some success. Anti-fretting coatings for turbine blades have also been employed and found to reduce fretting corrosion. Lubrication where feasible is another approach for minimizing the potential of fretting corrosion.