We often use the term "rust" to mean corrosion, but these two terms do not mean the same thing.

Distinguishing between Rust and Corrosion

Rust is a coating that occurs on the surface of iron or steel as it oxidizes, which is the result of an electrochemical reaction between iron and oxygen due to oxygen and moisture in the atmosphere as well as any moisture directly deposited on the surface of the metal. If moisture is absent, the rusting process will depend solely on atmospheric oxygen.

Rust is reddish brown or brownish yellow in color, flaky and brittle. It can be of different types, such as hydrated ferric oxide or ferric oxide-hydroxide, which is FeO(OH) or Fe(OH)3.

However, rusting of any type does not provide reliable protection against any further deterioration. Green rust can be formed on rebars, which are used in cement concrete pillars for marine underwater applications. In this case iron reacts with chlorides without the presence of atmospheric oxygen.

As rust forms, the iron and steel metal parts lose their integrity as the layers of rust gradually form, flake and fall off like scale from the parent metal, due to its brittleness. Rusting weakens the metal part. It also enables the growth of organisms such as bacteria and leads to aesthetic issues. (See Testing For Microbiologically Influenced Corrosion in Pipelines for more on bacterial growth.) In due course, the parent metal will be fully converted to flakes of rust, leaving no trace of the parent metal. 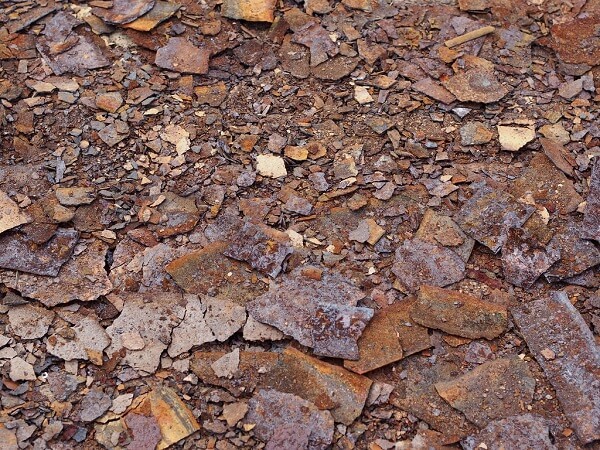 The oxidation of aluminum, on the other hand, as an electrochemical reaction due to the presence of atmospheric oxygen, is called corrosion. This is different from rusting because the flaking and scaling off process is totally absent in this case. Generally, a thin aluminum oxide (Al2O3) film of 4 nm thickness forms on the surface due to oxidation, which protects the substrate from further corrosion because the film is not brittle. The aluminum oxide film is fairly stable in the presence of water.

However, the water's pH may affect the stability of the film. When the Al2O3 film is in contact with chlorides, formation of dialuminum hexachloride begins. When moisture is present it can result in crevice corrosion and pitting corrosion, due to puncturing of the passive Al2O3 film.

Alloys such as aluminum bronzes take advantage of the aluminum's passive film formation during oxidation. (Learn more about aluminum and aluminum alloy corrosion in The Corrosion Properties of Aluminum and Its Alloys.) The oxide film can be recognized by its appearance as a dull gray layer. During the oxidation itself the film hardens to provide a stable protective coating on the exposed surface of the affected metal. Further electrochemical deterioration is fully halted by the protective Al2O3 layer produced during the initial oxidation.

In certain applications where the aluminum oxide film is repeatedly rubbed off and rebuilding of the oxide film is impeded, alkaline and acidic environments can readily promote localized pitting corrosion of aluminum and its alloys. Localized pitting exposes more parent metal to the environment, so any newly formed protective film is destroyed and thus the pitting continues to progress. Pitting results in unsightly holes all over the surface, accompanied by a reduction in strength and the initiation of fatigue cracks. However certain alloys of aluminum have greater corrosion resistance.

A hard aluminum oxide film can also be purposely formed in the factory through a process called anodizing. A plasma electrolytic oxidation process causes the formation of crystalline Al2O3 with greater hardness on the surface.
Because Al2O3 is amphoteric, it reacts with acids as well as bases. While reacting with NaOH, it produces sodium aluminate, which has hardness and a high melting point. It is also an insulator of electricity.

Aluminum cannot rust as it contains no iron particles. However, it is susceptible to corrosion in the presence of oxygen that is readily available in the surrounding air. The electrochemical reaction between aluminum and oxygen causes the formation of a thin, hard protective film of aluminum oxide.

The Corrosion Properties of Aluminum and Its Alloys

If Copper is a Noble Metal then Why Are My Pipes Corroding?

Protecting Pipelines from Corrosion Under Insulation

Salinity is a measure of dissolved salts in a body of water. It is calculated as the amount of salt (in grams) dissolved in...
Read Full Term