What Does McConomy Curves Mean?

McConomy curves are curves on a graph where sulfide corrosion rates are plotted against temperature data on the basis of industrial experience. They are used to predict the relative corrosivity of crude petroleum at operating temperatures above 500°F (260°C). They may be used for processes containing hydrogen gas having hydrogen partial pressures of 50 psa or less. The estimate obtained from these curves are average corrosion rates.

The first data for plotting McConomy curves were provided by a survey conducted by the American Petroleum Institute (API) Subcommittee on Corrosion in 1961. Although the data given by respondents were incomplete and scattered, the so-called original McConomy curves are named in honor of H.F. McConomy.

McConomy curves can predict the relative corrosivity of crude oils and their various fractions. The McConomy calculation utilizes sulfur concentration (wt%), temperature and metallurgy to estimate a maximum anticipated corrosion rate for a given data set and process location.

While this method relates corrosivity to total sulfur content, and does not take into account the variable effects of different sulfur compounds, it can provide reliable corrosion trends if certain corrections are applied. The experience has shown that the original McConomy curves tended to predict excessively high corrosion rates.

Further experience has proven that the original McConomy curves should be decreased by a factor of 2.5, and in 1986 the modified curves were reported. The Modified McConomy Curves have been used to predict corrosion rates during sour processing operations. 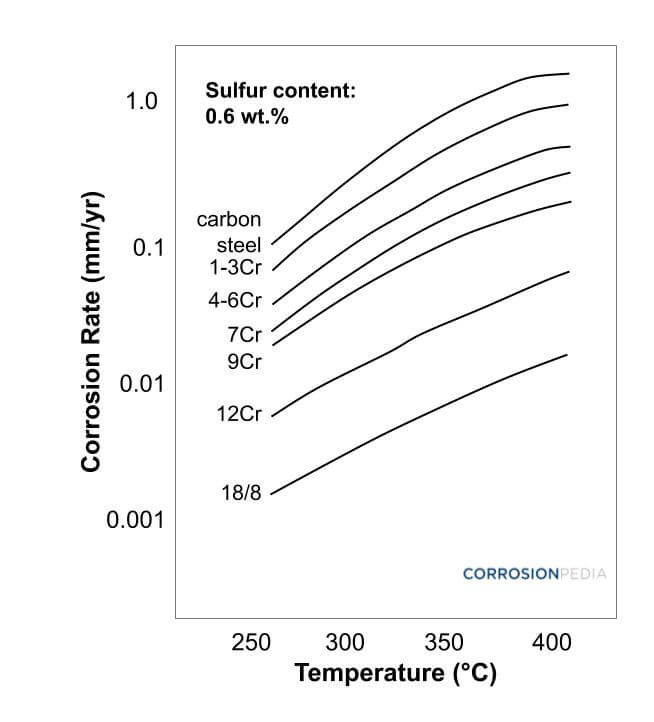 The Modified McConomy Curves demonstrate the beneficial effects of alloying steel with chromium in order to reduce corrosion rates. Corrosion rates are roughly tenfold reduced when ferritic 9Cr steel instead of carbon steel is applied. The lowest corrosion rates are noted for austenitic 18Cr-8/10Ni steel.